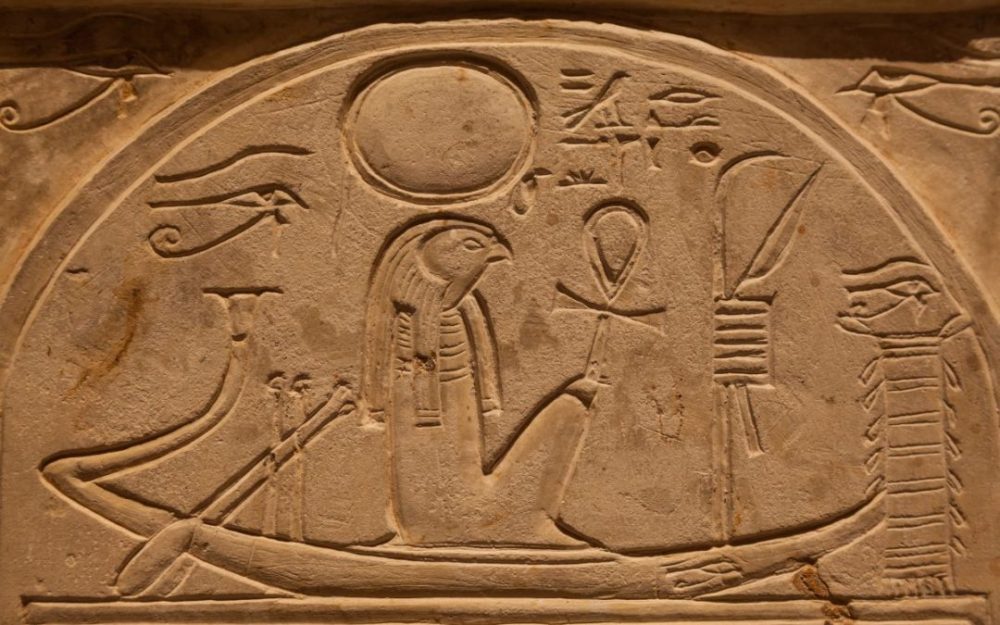 God Ra, the ruler of all creation, took the place of Horus as the most important deity for Ancient Egyptians around the time of the Fifth dynasty. As one of the most mentioned names in Egyptian mythology, there are countless fascinating myths and tales of Ra. Here is what deserves to be known!

The god Ra was the sun deity in ancient Egypt. The sun symbolized light, warmth, and growth to the ancient Egyptians. This made Ra one of the most important Egyptian deities, and he was considered the ruler of all creation.

The worship of Ra rose to prominence in the fifth dynasty in the 25th and 24th centuries BC. Since then, all pharaohs of Egypt were considered the earthly embodiment of the almighty Ra.

1. Ra was considered the highest power in the cosmic universe

Ra was already one of the most important deities in ancient Egypt by the 25th century BC. Ancient Egyptians believed that he ruled all parts of the world: heaven, earth, and the underworld.

Thus, he was the supreme power in the cosmic universe. His importance is visible in ancient myths.

A common feature of Egyptian creation myths was the world emerging from the surrounding waters of chaos. There are many creation myths in ancient Egypt, and as the god Ra became more important, he began appearing in many of them.

In one of the myths, Ra, being one of the creator gods, rose from the ocean of chaos on an ancient hill. Then, he created eight other gods.

Thus, a group of nine major deities was formed in Egyptian mythology, known as the Great Ennead.

According to another myth, Ra once roamed the world and saw that everything was perfect. The sight brought tears to his eyes. The tears that fell to the ground became people.

3. God Ra traveled in the sky during the day and in the underworld at night

According to the ancient myths, god Ra sailed across the sky during the day in his boat, known as Atet or “The Boat of a Million Years”.

In the morning, the boat went by the name of Madget, which directly means getting stronger while at the end of the day, it was called Semekted or getting weaker.

According to Egyptian mythology, Ra dies at the end of each day and is swallowed by the sky goddess Nut. After his death, Ra sails through the underworld, and the work of illuminating the world is left to the Moon.

While traveling through the underworld, Ra was attacked by Apep, a deity in the form of a giant serpent. However, Seth, the Egyptian god of chaos and disorder, who accompanied Ra, defeated Apep and saved him.

When another day begins, Ra’s journey in the underworld ends, and he is reborn in the morning to begin his journey again.

4. The god Ra was usually depicted as a man with a falcon’s head

The god Ra was represented in many forms. The most common was of a falcon-headed man topped with a shiny disk of the sun. The solar disk is surrounded by a sacred cobra named Urey.

In some other depictions, Ra is also shown as a man with the head of a beetle or ram. The solar disc, the symbol of god Ra, remains constant in all variations of his illustrations.

5. The pharaohs ruled Egypt as the earthly incarnation of Ra

Ra was revered as the main god of the Heliopolis pantheon and the creator of everything that existed in the world. The ancient Egyptians believed that they owed their existence to god, for he created the world, and Ra was King from that day.

Pharaohs were considered his descendants and successors. The myth says that Ra brought order to the world of chaos, and the pharaohs should have done the same when they ascended the throne.

From the 25th century BC, when Ra gained prominence, the pharaohs often associated themselves with Ra to establish their supremacy, as they wanted to be perceived as the earthly embodiment of the almighty Ra.

6. The Eye of Ra is an extension of his powers

The Eye of Ra is a symbol highly regarded by the ancient Egyptians. As a result, there are many myths about the eye. According to one well-known myth, the children of Ra, Shu, and Tefnut, were somewhere when they were lost without a trace.

God Ra pulled out his eye and sent it to look for his children. The eye found them and returned them to their father.

However, in the meantime, Ra had another eye. Seeing this new eye made the old one feel betrayed and enraged. To appease this, Ra gave the eye a powerful forehead position in the form of Urey, a symbolic cobra that frequently appears in Egyptian art.

The Eye of Ra became an extension of the power of Ra, serving him as a female counterpart and a violent force that conquered his enemies.

7. Ra was often merged with other deities

Ra was often merged with various deities such as Amun, which made the all-powerful Amun-Ra, the creator of the sun, otherwise known as the King of all gods.

In another myth, Ra was merged with Atum to form Atum-Ra.

Before Ra became the most important deity, Horus was taking his place. Therefore, Egyptians combined these two almighty gods to form Ra-Khorakhty, which ideally means “The mountain on the horizon.”

There are numerous other cases where Ra was merged with different deities, but these are the most important ones.

8. Ra was the most powerful deity

According to ancient Egyptians, the god Ra was the highest power in the universe. Based on different myths, he is the ruler of all the gods. Therefore, he had all the power in the world and beyond.

His powers were so great that he was considered the creator of humankind and the planet. Among other things, he was also responsible for creating seasons, animals, and plants. Ra’s powers were extraordinary, and he controlled them through the hidden name in which his powers lived. Since this hidden name was known only to Ra, only he could use these abilities.

Although Ra was almighty, a myth suggests that he eventually became weak as he grew old.

Isis, the goddess of marriage, fertility, magic, and medicine, knew very well that the powers of Ra are hidden in his secret name. She wanted to know this name in order to become omnipotent.

By collecting Ra’s saliva and mixing it with clay, she made a snake supposed to bite Ra.

When she succeeded, Ra became sick and called the other gods for aid.

Isis promised to heal Ra only if he gave her the secret name. Since the pain was unbearable, Ra let Isis know the name. Thus, the powers of Ra were transferred to Isis. Although she kept her promise to heal him, she then renounced Ra and made Horus the King of the gods.

Pharaohs of Ancient Egypt from the time of the fifth dynasty and later became known as the Son of Ra. However important he was as a god, no temples had statues of Ra. Instead, they had open structures to receive sunlight, symbolized by the god Ra.

The first temple built for Ra was made in Abusir by the founder of the fifth dynasty – pharaoh Userkaf.