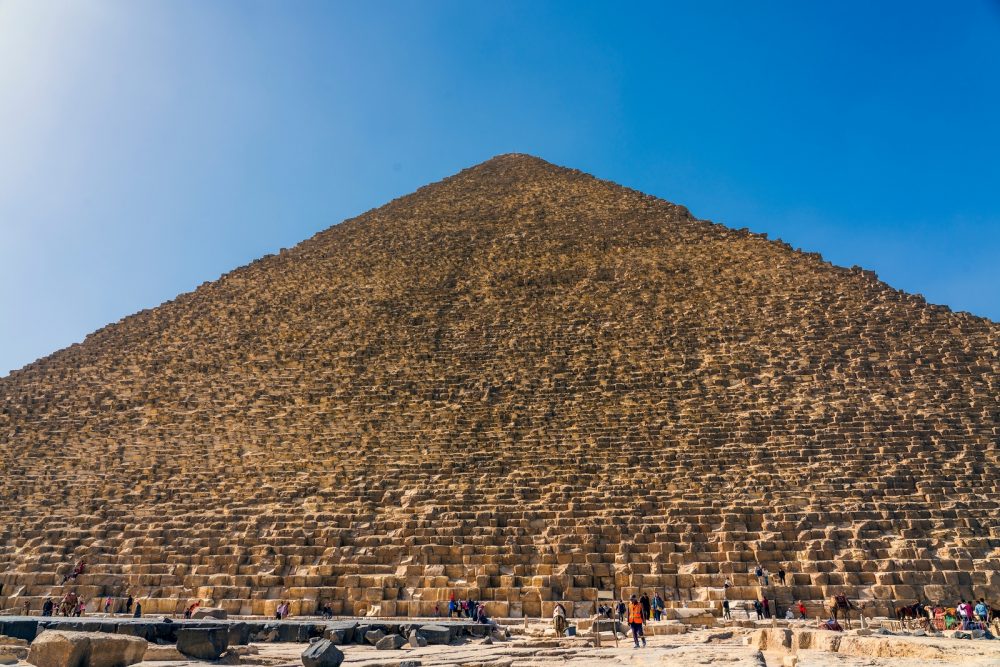 If the Pyramid was really built in twenty years' time as mainstream scholars suggest, it means that a block of stone had to be moved into place about every 5 minutes of each day and night.

The Great Pyramid of Giza (also known as the Pyramid of Khufu) is the oldest of the seven wonders of the world and the only one that still endures and is the largest of the pyramids of Egypt.

It is believed to have been commissioned by Pharaoh Khufu of the fourth dynasty of Ancient Egypt. The architect of the monument is thought to have been Khufu’s Royal Vizier Hemiunu.

The estimated date of completion of the construction of the Great Pyramid is around 2570 BC. C., being the first and largest of the three great pyramids of the Giza Necropolis, located on Cairo’s outskirts, in Egypt.

It was the tallest building on Earth for 3800 years until, in the fourteenth century, it was surpassed by the spire of Lincoln Cathedral in England.

The pyramid is thought to have been built with about 2.3 million stone blocks, whose average weight is believed to be two and a half tons per block, although some blocks of stone weigh more than 80 tons. The Pyramid is believed to have stood initially 146.7 meters in height, although the pyramid currently rises 138.8 meters into the air.

The massive structure was originally covered by about 27,000 white, polished limestone blocks, several tons each. The Great Pyramid maintained this aspect until the early fourteenth century when an earthquake detached the limestone lining.

Subsequently, the Ottoman Turks used this coating for the construction of various buildings in Cairo. The mastermind behind the megalithic construction is thought to have been royal vizier and architect Hemiunu.

Hemiunu is believed to have been the son of the architect Nefermaat who was the architect of the pyramid of King Sneferu, the father of Khufu. Archaeologists have found mentions of Hemiunu with titles approximately translated as Master of works and Vizier.

Hemiunu’s tomb was located near the pyramid of Cheops and contained reliefs of his image.

Some stones of his mastaba are marked with dates that refer to the reign of Khufu. Although dating the Great Pyramid is nearly impossible, archaeologists argue the monument was most likely constructed during ancient Egypt’s fourth Dynasty reign of Pharaoh Khufu.

The exact date of construction is a mystery since, for some reason, there are no ancient texts that mention the purpose nor the construction methods of the Great Pyramid.

The Pyramid’s interior is equally mysterious as its exterior. The Great Pyramid of Giza comprises three main chambers, two located inside the pyramid and referred to as the king’s chamber and the queen’s chamber. One beneath the pyramid, cut into the bedrock and dubbed the subterranean chamber.

The Pyramid is also home to the so-called Grand Gallery, a passage about 47 meters long and 8 meters high. The walls of the Grand Gallery are vertical from the ground to a height of two meters, and, from there upwards, the blocks of stone in the walls are corbelled inwards by 7.6 centimeters on each side.

The so-called king’s chamber is made up of granite slabs and is rectangular in shape. It has smooth walls and ceilings, without decoration. It currently only contains an empty granite sarcophagus, without inscriptions, deposited there during the pyramid’s construction and not after it was constructed since it is wider than the pyramid’s passageways.

The so-called queen’s chamber, as named by the Arabs, although according to Mark Lehner and the vast majority of Egyptologists, was not destined for the king’s wife but for a Ka statue of the king (Serdab, a room intended to contain the spiritual representation of the deceased: a Ka statue), is located almost on the axis of the pyramid.

It is accessed through a horizontal passage, which connects with the Grand Gallery’s lower area, initially hidden by stone slabs. It is rectangular in shape, has smooth walls, and features no decorations whatsoever.

The underground chamber of the Great Pyramid of Giza was excavated in the bedrock and is rectangular in shape, with irregularly shaped ground, flat walls, and roof. It is accessed by a descending passage, prolongation of the first passage of the pyramid. It is also connected to the Grand Gallery through a narrow tunnel, almost vertical, drilled in the blocks.

Interestingly, the Great Pyramid of Giza is also the only eight-sided pyramid in existence.

Flinders Petrie observed, among other morphological aspects, that the horizontal section of the Great Pyramid has an octagonal, four-pointed star shape since each of the faces is composed of two planes, with a slight slope towards the center, hardly appreciable to simple sight due to the almost total absence of the cladding, since only some blocks of limestone, from the quarries of Tura, have been preserved in the first course of the northern face.