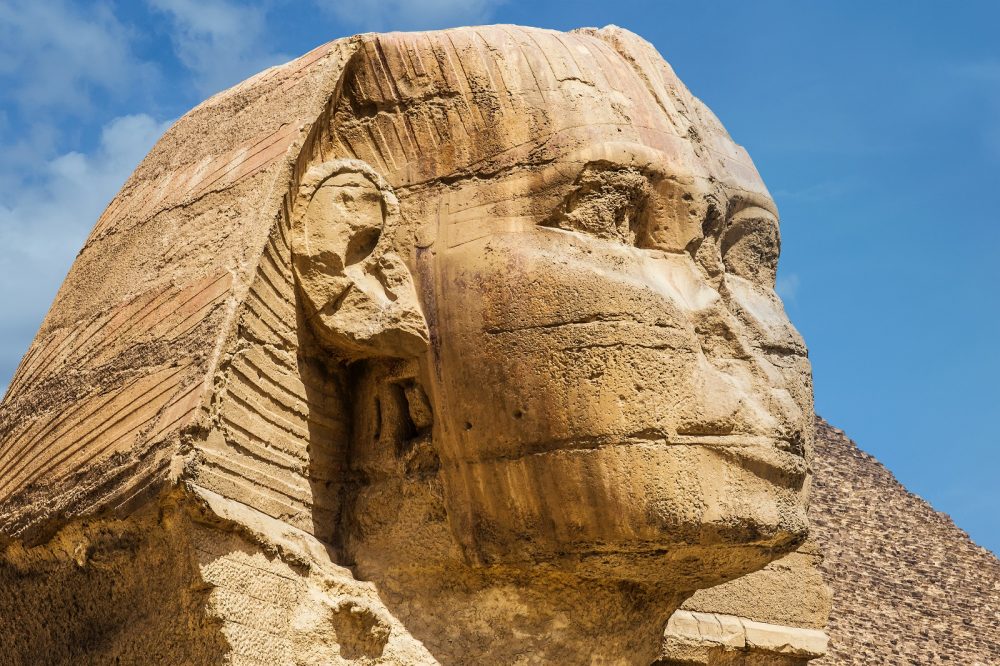 The Great Sphinx of Giza is the most unique ancient statue in the world. Not only is it unique because of its mysterious, secret-filled shape, but also because of the history behind it.

The Sphinx is one of the oldest, most massive statues ever carved in ancient times.

Although there are no ancient texts anywhere mentioning when it was carved, Egyptologists generally assume it was created by the ancient Egyptians of the Old Kingdom, most likely during the rule of Pharaoh Khufu, sometimes around 2,550 BC.

Facing directly West to East, the Sphinx stands together with the Giza Pyramids on the west bank of the Nile.

Carved into the bedrock from the Giza plateau, some of the stones used in the construction of the pyramids are believed to have been quarried from near the Sphinx. As such, the Sphinx is acknowledged as one of the oldest and largest statues on the planet’s surface, and many of its basic facts are subject to debate, most of which is related to its exact age, purpose, and symbolic representation.

Given the lack of inscriptions or texts referring to the massive guardian statue, it is impossible to know that the creators called their masterpiece initially.

It remains a profound mystery as to why archeologists have not explained the lack of inscriptions describing its construction or its original purpose.

What we do know tells us very little about it.

The ancient Egyptians in the New Kingdom, around 1,550 BC, revered the Sphinx as the solar deity Hor-em-akhet,  Horus of the Horizon.

The name making reference to the statue today, the Sphinx, was given to the monument during classical antiquity, more than 2,000 years after the monument was supposedly carved.

As time passed, Medieval Arabs would eventually come to call the monument balhib or bilhaw. The modern Egyptian Arabic name of the statue is Abū al Hūl, which means the terrifying one.

The lack of information about the Sphinx means that theories proposed by academic Egyptologists regarding the monument’s builder and date of carving are not universally accepted. As a result, various authors and scholars had proposed alternative chronologies and hypotheses concerning the person who commissioned the Sphinx and when it was carved.

It is known that early Egyptologists maintained for years that the Great Sphinx, as well as nearby temples,  predate the Fourth Dynasty of Khufu, Khafre, and Menkaure. This theory goes hand-to-hand with some theories proposed by modern authors such as Graham Hancock and Robert Bauval.

Writing in “The Message of the Sphinx,” the authors draw reference to the research of John West:

“‘If the Sphinx was as recent as 7000-5000 BC. I think we probably would have other Egyptian evidence of the civilization that carved it. Since there is no such evidence, West reasons that the civilization responsible for the Sphinx and its neighboring temples must have disappeared long before 7000-5000 BC: The missing other evidence is, perhaps, buried deeper than anyone has looked and/or in places no one has yet explored—along the banks of the ancient Nile perhaps, which is miles from the present Nile, or even at the bottom of the Mediterranean, which was dry during the last Ice Age.”

Selim Hassan, one of Egypt’s most famous Egyptologists, wrote about the Sphinx in 1949, where he summed up the problems surrounding the Sphinx and who the statue represents. Although he admits that in the academic world, the Sphinx is believed to represent the face of Pharaoh Khafre, he explains that there isn’t’ one contemporary inscription that connects the Sphinx to Khafre.

As noted by Hancock, although it can’t be said that or proved that the monument dates back to around 7,000 BC, as proposed by Robert Schoch, it can’t also be suggested that the Sphinx dates further back in time to around 10,000 BC. But although these two controversial dates can’t be taken as evidence of anything, neither can orthodox Egyptology prove that the Sphinx indeed belongs to Khafre and that the statue was carved around 2,500 BC.

And while the controversy surrounding the age of the Sphinx continues, we know that the statue is so old that already in ancient times, the Sphinx underwent numerous restorations after being covered and dug up by Egypt’s golden sand numerous times.

The idea of the Sphinx dating back to times before ancient Egypt’s Fourth Dynasty can be traced back to 1883, when already then Egyptologists such as Flinders Petrie suggested the Sphinx was older than Khafre:

“The date of the Granite Temple [Valley Temple] has been so positively asserted to be earlier than the fourth dynasty that it may seem rash to dispute the point.”

This view was shared by other researchers such as E. A. Wallis Budge, who wrote in “The Gods of the Egyptians, in 1914 that: “This marvelous object [the Great Sphinx] was in existence in the days of Khafre, or Khephren, and it is probable that it is a very great deal older than his reign and that it dates from the end of the archaic period circa 2686 BC.”

Gaston Maspero, who surveyed the Sphinx in 1886, concluded that the Great Sphinx of Giza was “the most ancient monument in Egypt.”

Maspero argues that because the Dream Stela showed the cartouche of Jhafre on line 13, he was responsible for the excavation. Therefore the monument must predate Khafre as well as his predecessors.