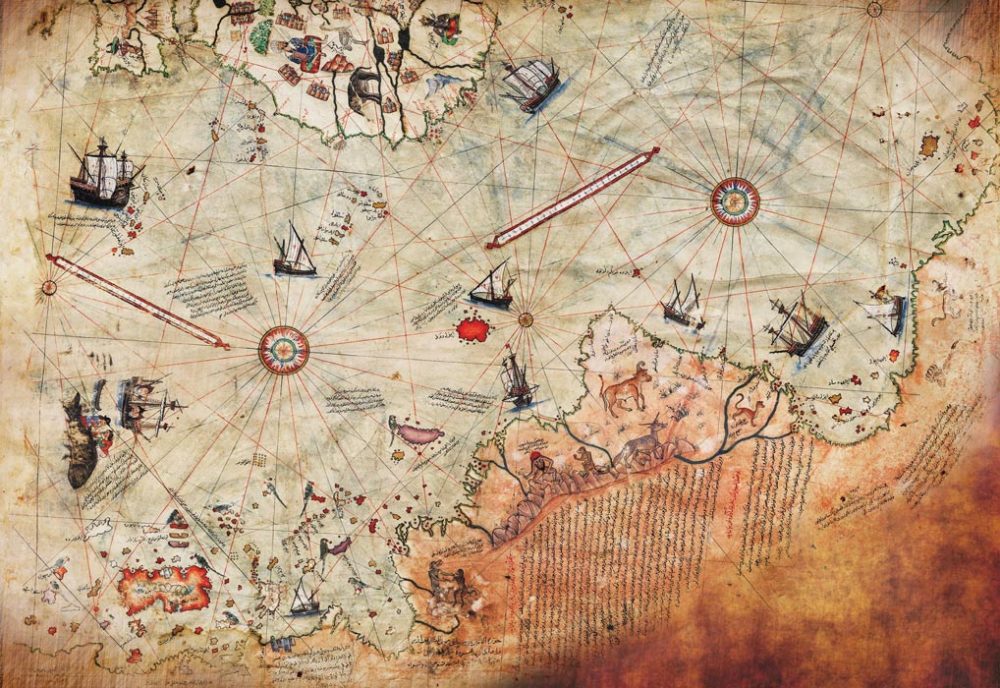 The Piri Reis map is more than simply a literal work of art of cartography, it is the map that has influenced the creation of countless conspiracy theories and is highly debated to this day.

The Piri Reis map is perhaps the most controversial surviving document from the age of great geographical discoveries, which is constantly at the center of controversy.

The debates are mainly fueled by the fact that conspiracy theorists see Piri Reis’ map as evidence of old research on the Antarctic coast made before the era of the Great Geographical Discoveries.

The history of the map is curious. By a happy coincidence, the German theologian Gustav Adolf Deissmann came across it. It is known exactly on what date he came across it – October 9, 1929. Deissmann was appointed by the Turkish Ministry of Education to catalog non-Islamic works in the library of Topkapi Palace. At Deissmann’s insistence, the governor of the palace, Khalil Eden, organized a search and managed to find some neglected and forgotten materials.

When he got his hands on the map, Deissmann realized that he could potentially hold a unique find in his hands, so he showed it to the orientalist Paul Calais, who identified it as a map made by Piri Reis. The discovery became an international sensation because at that time it was the only known copy of a map of the world by Christopher Columbus, and it was also the only 16th-century map that showed South America in its geographically correct longitudinal position to Africa.

The fragment found in Topkapi contained the preserved western third of a map of the world drawn on a parchment made of gazelle skin. Due to the damaged angle of the fragment, its dimensions are also disputed, but values ​​of about 90 x 63 cm have been indicated.

The surviving fragment contains the west coast of Africa and the east coast of South America. The map was signed by Piri Reis, an admiral of the Ottoman Empire, a geographer and cartographer, and dates from the month of Muharram from the Islamic year 919, which is equivalent to 1513 in the Gregorian calendar.

It was presented to Sultan Selim I in 1517 as the first printed map in the Ottoman Empire. In the legend of the map, Piri Reis describes that he used twenty graphics and mappae mundi (ie “maps of the world”) to compile it. According to Reis, these maps included eight Ptolemaic maps, an Arabic map of India, four newly drawn Portuguese maps of Sindh, Pakistan, and a map of Christopher Columbus of the western lands.

Piri Reis’s map is currently kept in the library of Topkapi Palace in Istanbul, Turkey, but is not usually displayed to the public. A copy of the Piri Reis map is depicted on the reverse of the Turkish 10 lira banknotes.

Since its discovery, the map has been the subject of various conspiracy theories suggesting that it depicts Antarctica 300 years before the southern polar continent was discovered. The other, even more, a fantastic statement is that not only is Antarctica depicted, but it is shown as it was before it was covered with an ice cap more than 6,000 years ago.

The great debate over Piri Reis’s map began in 1965 when Professor Charles Hapgood published his hypothesis of what was depicted on the map in the book “Maps of the Ancient Sea Kings“. Along with his students at the University of New Hampshire, the professor studied the map and found a number of anomalies, such as the use of a Mercator projection and the inclusion of glacial Antarctica. The Greeks knew and compiled maps with a cylindrical projection based on their understanding of the spherical shape of the Earth.

Europeans began to use Mercator projection only at the end of the 16th century (the inventor of projection, the cartographer Gerard Mercator, was born in 1512, and Piri Reis’s map dates from the following year, 1513).

European sailors learned to use astronomy and geometry to determine longitude and latitude only after the invention of the chronometer in 1760. And if these two discrepancies can be logically explained by the use of Greek source maps and graphs from the time of Alexander the Great, then nothing can explain the inclusion of Antarctica.

As a result of these considerations, Hapgood suggested that Piri Reis’s map was based on material dating back to at least 4000 BC, ie. before all known civilizations had come up with the idea of ​​writing and even less of mapping the world around them.

Hapgood’s theory suggests that an unknown prehistoric civilization had the technology to navigate the planet’s major sea routes and had a relatively accurate idea of ​​the geography of the globe. The professor also suggested that topographic descriptions of the interior of the continents are possible if “prehistoric super-civilization” had flying technology, so they were masters not only of navigation by sea but also by air.

Evidence against his theories

Realists and serious scientists pointed out that the map fairly accurately represents the South American coastline. In support of this is the very exact coincidence with modern geographical features along the coast and the interior of the continent, which is presented in the map from the beginning of the XVI century.

If this is rejected, then – according to the image – it should be assumed that Antarctica and South America were once connected in the region of Uruguay and that Argentina did not exist.

This argument alone is sufficient to refute the claim that there is an image of Antarctica on Piri Reis’s map, without the continent’s ice sheet; only satellite imagery and twentieth-century technology have given us the opportunity to see exactly what the continent of the South Pole looks like beneath the thick layers of ice.

Other sensational theories by Professor Hapgood have already been refuted. An example of this is his hypothesis that a sudden change in the inclination of the earth’s axis occurred around 9500 BC and led to the displacement of Antarctica, sending it hundreds of kilometers to the south this led to a change in climatic conditions and the coverage of the continent with an ice cap. Modern scientific data has proven that such a change is impossible to happen.