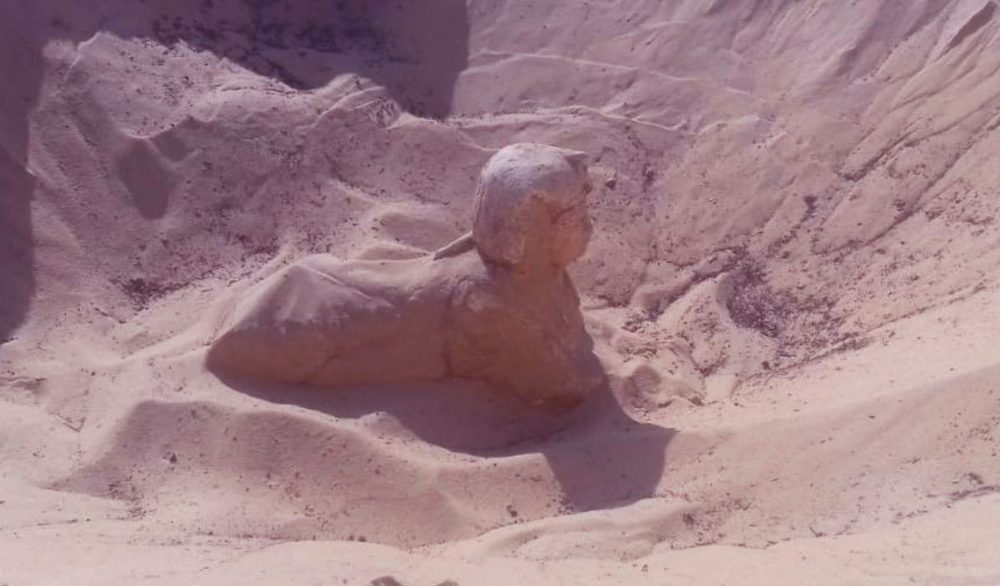 A rare, buried statue of an ancient Egyptian Sphinx has been discovered by archaeologists.

Archeological excavations in Egypt have revealed the presence of a rare buried Sphinx made of limestone.

An archaeological mission in Egypt has recently reported the discovery of a rare Sphinx statue in Tuna al-Gabal cemetery in the city of Mallawi, Minya.

The country’s Ministry of Antiquities revealed the recent discovery said in a statement that unveils the royal statue’s size.

“The statue is made of limestone with 35 cm in height and 55 cm in length,” revealed Gamal el-Samastawy, director-general of the Antiquities of Middle Egypt.

“The clear and beautiful features and details of the statue mirrored the skillfulness of the ancient Egyptian sculptor,” he added.

In addition to the small, well-preserved Sphinx found buried beneath the sand, the archeologists have also reported discovering a set of amulets crafted of blue faience pottery for the goddess Bes. The researchers also revealed they have successfully excavated pottery fragments of different shapes and sizes, as well as an alabaster bottle.

Although experts are exciting after discovering the buried Sphinx, it remains a mystery what the statue was doing in the area in the first place. To discover the Sphinx origins, the researchers will continue surveying the site, and further excavations may be needed.

Interestingly, the area where the Sphinx was found buried has yielded numerous archaeological discoveries in the past few years.

Previous archaeological discoveries have revealed the presence of vast cemeteries and burial sites.

Researchers have also discovered various stone-made and wooden coffins in which well-preserved mummies were found.

Minya is located around 245 kilometers from Cairo, on the western bank of Egypt’s Nile River. The city’s name derives from the Ancient Egyptian Men’at Khufu, which means the nursing city of Khufu, linking it to the Pharaoh Khufu, Fourth Dynasty Pharaoh, and the man who is believed to have commissioned the construction of the Great Pyramid of Giza.

Minya’s history dates back to the very beginning of ancient Egypt.

Minya is believed to have remained an autonomous city-state until King Menes unified Upper and Lower Egypt around 3,200 BC.

The Sphinx discovered at Minya is unique because of its relatively small size but because of the decorative elements.

Unlike its more famous counterpart standing guard at the Giza pyramid complex, the Sphinx excavated at Minya has a clear face, whose nose also appears to be damaged.

Its exact age remains unclear, although it is expected that further studies of the Sphinx and the area where it was discovered could reveal its date of creation. Archeologists are unsure who the Sphinx is meant to depict.

The Sphinx’s head appears to be well preserved, and its eyes, nose, ears, and mouth are clearly visible.

The most famous Sphinx of Egypt is that of Giza.

It is the oldest known monumental sculpture in Egypt.