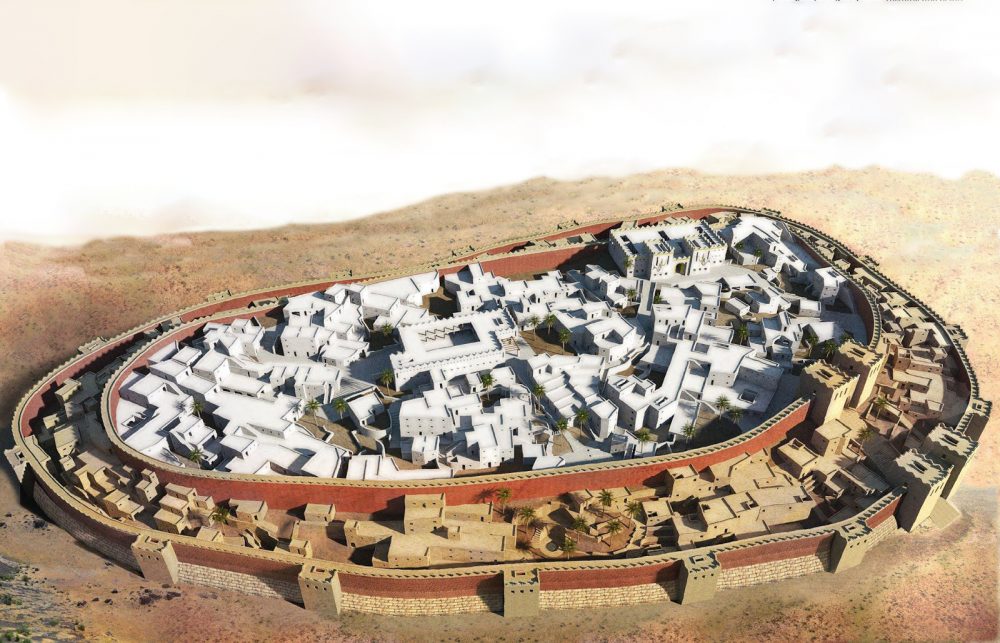 Archeological excavations have shown that the earliest wall on the planet’s surface dates back to around 8,000 BC. Around 10,000 years ago, ancient builders created a massive wall around an early proto-type city, protecting a settlement of approximately 3,000 inhabitants.

Every time we speak of the pyramids, the Egyptian pyramids at Giza spring to mind.

Although there are around 120 pyramids throughout Egypt, the imposing monuments at Giza are the most famous.

It is there where the Great Pyramid of Giza stands, accompanied by a nearly identical, albeit smaller pyramid, thought to have been built by Khufu’s successor Khafre. The smallest of the three pyramids at Giza is that of Menkaure, and it marked the end of pyramid-building at Giza.

Although these three are the most imposing pyramids in Egypt and the most famous, they are by no means the oldest.

It is believed that the first pyramid in Egypt was built some 4,700 years ago during the Third Dynasty reign of Pharaoh Djoser.

With a total volume of 330,400 cubic meters (11,667,966 cu ft), rising to a height of more than 63 meters, the Step Pyramid was an unprecedented structure. The monument itself and the pyramid complex as a whole was of unseen scale. Experts believe that such was the size of Djoser’s ancient wonder that it covered 15 ha (37 acres), which is around 2.5 times as large as the Old Kingdom town of Heirakonpolis.

The successful completion of the massive pyramid complex at Giza testifies that around 4,700 years ago, the people of ancient Egypt were capable of undertaking bewildering constructions.

As Mark Lehner noted, the social implications of completing such a large and carefully sculpted stone structure are beyond staggering. The pyramid of Djoser testifies that already in 2,700 BC, ancient Egypt was a well-developed country, and the royal government had a new level of control of resources, both material and human.

Did the very first megalithic stone-cut buildings appear in Egypt? Or, did other cultures develop similar, if not greater, structures before Egypt’s Third Dynasty?

As it turns out, thousands of years before the Third Dynasty, when Egypt’s first pyramid was built, people were already creating mind-boggling stone-cut constructions.

The oldest temple on Earth is evidence of that.

A temple of the Ice Age

Built between 13,000 and 11,000 years ago, the megalithic stones at Göbekli Tepe in present-day Turkey are evidence that people on Earth had the ability to create ingenious and mind-boggling structures.

Göbekli Tepe features some of the most impressive and oldest structures on Earth. Somehow, by means we have still not fully understood, ancient people at Göbekli Tepe managed to quarry, transport, and erect massive blocks of stone weighing several tons.

These standing stones would eventually make up what is now considered the oldest megalithic temple on the surface of the planet, bearing evidence that more than 10,000 years ago, people had the ability to build megalithic structures.

Göbekli Tepe is so ancient that it was abandoned in 8,000 BC. This means that the builders of the intricate temple built it and abandoned it before Egypt’s pyramids were even conceived. Not many people are fully aware of the complexity and scale of Göbekli Tepe and what it means in the history of humankind. So far, more than 200 massive pillars have been found in around 20 circles. Each of the pillars has a height of approximately six meters and weighs about ten tons.

Although Göbekli Tepe is perhaps one of humankind’s most impressive architectural feats, numerous equally stumping structures spread across the planet.

Located in the city of Jericho in the West Bank, we find another bewildering structure. This wall is arguably the oldest defensive wall discovered by archeologists anywhere in the world.

It was built of undressed stones and is located at an archaeological mound referred to as Tell es-Sultan.

Archaeological surveys indicate the wall is a Pre-Pottery Neolithic defensive or flood protection wall and dates to around 8,000 BC. This means that some 10,000 years ago, ancient humankind built complex defensive structures using massive stone blocks.

The Neolithic wall was part of a more significant defensive structure. Experts have revealed it was complemented by a stone tower built into it.

Through surveys of the site, scholars believe that the wall was built to prevent floods. The tower was most likely used for ceremonial purposes, however, given the large dimensions of the wall (around 1.5 to 2 meters (4.9 to 6.6 ft) thick and 3.7 to 5.2 meters (12 to 17 ft) high, and the tower measuring approximately 8.5 meters (28 ft), researchers propose the wall and its adjacent structures served a defensive purpose as well.

Constructing something of that size around 10,00 years ago was not an easy task, and it is suggested that social organization, labor division, and classes were already clear at that time.

Surrounding the wall, the ancient builders created a ditch 8.2 meters (27 ft) wide by 2.7 meters (9 ft) deep. Surveys have shown that the ditch was actually cut through solid bedrock with a circumference around the town of as much as 600 meters (2,000 ft). This further adds to the complexity of the construction.

“The labor involved in excavating this ditch out of solid rock must have been tremendous. As we have discovered nothing in the way of heavy flint picks, one can only suppose that it was carried out with stone mauls, perhaps helped by splitting with fire and water,” explained archaeologist Kathleen Kenyon.

Historically the Wall of Jericho is of great importance. For example, the Book of Joshua deals with Jericho during the Late Bronze Age, at around 1400 BC, approximately 6,400 years after the Neolithic “Wall of Jericho” fell out of use.

The ancient city of Jericho is one of the oldest on Earth. So far, archaeological excavations have revealed more than 20 successive settlements at Jericho. The first settlement at the site is believed to have been created around 9,000 BC, which means it dates back at least 11,000 years, nearly at the start of the Holocene epoch.