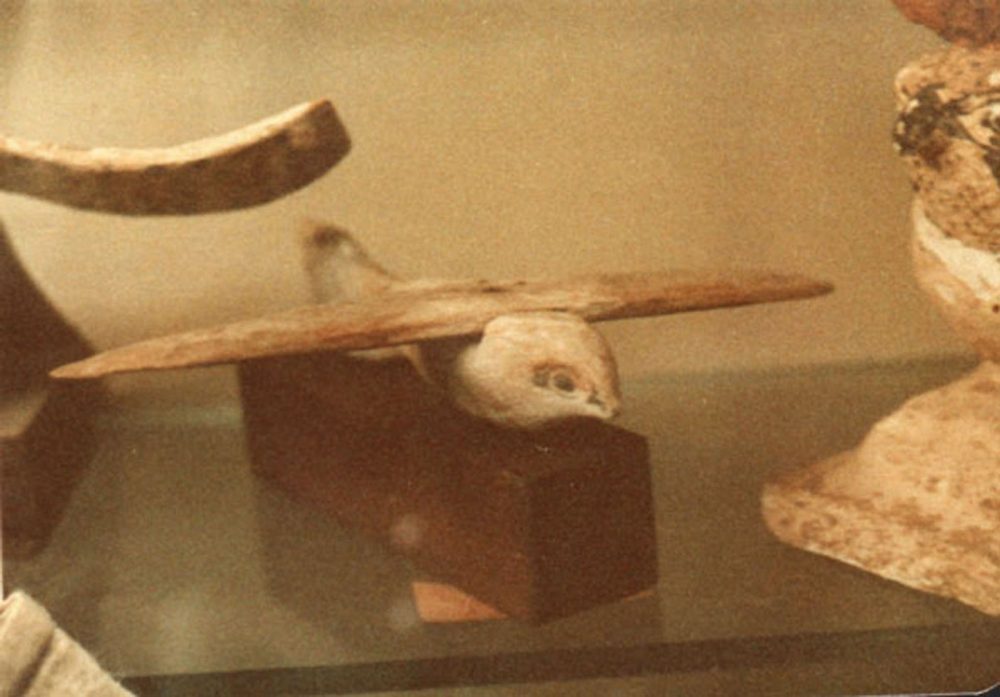 Dating back to 220BC, the Saqqara bird is one of the most controversial artifacts from ancient Egypt.

Ancient Egypt is home to a treasure trove of history. Amidst its pyramids, temples, lost cities, and mummies, certain discoveries have aroused archeologists’ interest because they are not ordinary.

They are different. They are strange.

One such discovery is a mysterious wooden artifact dating back to around 2,200 BC.

Housed at the  Museum of Egyptian Antiquities in Cairo, the so-called Saqqara Bird was discovered during an excavation of the Pa-di-Imen tomb in Saqqara, Egypt, in 1898.

It is the only such artifact ever discovered from ancient Egypt, and its poorly understood significance is due to the fact there aren’t any ancient texts that mention its purpose or origin.

Despite the artifacts’ mysteries, some Egyptologists argue that the Saqqara bird is no more than a ceremonial object depicting a falcon. It represents ancient Egyptian gods, most notably the falcon deity Horus and the sun deity Ra Horakhty.

Although the Saqqara Bird may also have been a toy for a child of royalty, some argue that it was more than just a ceremonial artifact or a toy: it could be an out-of-place artifact.

And that’s because recent studies have shown that the Saqqara Bird may have met the requirements actually to fly.

One of the first scholars to throw out the theory that the Saqqara bird may have been a device capable of flight was proposed by Egyptologist Khalil Messiha.

In the Egyptologists published a paper titled African Experimental Aeronautics: A 2,000-Year-Old Model Glider, in which he explained the following:

“The wing is made of one piece of wood, and its span is exactly 18 centimeters. The part of the body is the thickest—8 millimeters. Then it tapers in thickness towards the tips. One can note also that there is a Dihedral angle which is slightly unequal on both sides due to a slight distortion of the wood, caused by the passage of time.”

And precisely, the “Dihedral angle” mentioned by Dr. Messiha refers to the very same principles that are used in modern-day aircraft to achieve lift.

How is it possible that a 2,200-year-old artifact from ancient Egypt incorporates those characteristics? Was it a coincidence? Or is it possible, as some have come to suggest, that the ancient Egyptians really knew the principles of aerodynamics and flight more than 2,200 years ago?

Although the Saqqara bird featured a “Dihedral angle,” its tailplane was missing. When the item was discovered, the tailplane was already gone. But there is evidence that when the artifact was made, it included one.

Without the tailplane, the object would lack the aerodynamic stability that would allow it to fly correctly.

Nonetheless, Dr. Messiah wrote the Saqqara bird had the ability to achieve flight:

“I have already made a similar balsa wood model, and added the tailplane (which I suppose was lost) and was not astonished to find that it could sail in the air for a few yards when thrown by hand.”

The Saqqara bird eventually became an ancient Egyptian artifact of great interest. People wanted to determine whether or not the principles of aerodynamics and flight were discovered by the ancient Egyptians more than 2,000 years ago.

The history channel called aerodynamics experts Simon Sanderson to test this idea, who eventually crafted a replica of the Saqqara bird. The model replica was tested in a wind tunnel without its tailplane and was held in position using cables for stability. The test showed that the Saqqara bird could produce “four times the glider’s own weight in lift.”

To further examine the mysterious artifact, the data obtained from the Saqqara bird when it was tested in the wind tunnel was taken to the University of Liverpool and subjected to a flight simulator.

The History Channel concluded that “Over 2,000 years after the ancient Egyptians carved this mysterious bird, modern technology has proved beyond doubt that it could have flown.”

Although tests have shown that the Saqqara Bird may have been capable of flight in the distant past, archeologists and other experts remained skeptical.

Richard P. Hallion, a Senior Adviser for Air and Space Issues, notes that it is “far too heavy and unstable itself to fly.”

Mainstream archeologists do not see it as an example of ancient Egyptian knowledge of aerodynamics, nor do they acknowledge it as an ancient flying machine.

Although skeptical with reason, Egyptologists have perhaps failed to see the difference between the Saqqara bird and other bird-like figurines from ancient Egypt.

The Saqqara artifact is different, and it seems to possess “characteristics never found on birds, yet which are part of modern aircraft design,” as noted by Dr. Messiha.

In 1998, before a model of the Saqqara bird was tested for aerodynamics characteristics, Randall Floyd published an article in ” The Augusta Chronicle” titled “Flight may have begun before Wrights,” where he concluded that “Apparently the ancients possessed long-forgotten technologies.”

And many people seemed to agree with him, saying that the mysterious artifact, crafted from sycamore wood, incorporated certain principles of modern-aircraft design and that even after 2,200 years, it could glide through the air, with only “the slightest flick of the hand.”

But the truth is, its tough to come to such a conclusion.

Had the ancient Egyptians discovered the principles of flight and creating artifacts that could “glide through the air,” then why is it we haven’t discovered more examples of it?

Surely an artifact that could “fly” would have received more attention, and more replicas of such a device would have been created.

After all, it would have been beyond fascinating to see a human-made object fly through the skies of ancient Egypt more than 2,000 years ago.

So what is really the ancient Egyptians who invented the very principles of aerodynamics and possible flight?

According to Martin Gregorie of Harlow, Essex, a designer, builder, and flyer of Free Flight model gliders seems to disagree, as noted by Brian Haughton in his book “Hidden History: Lost Civilizations, Secret Knowledge, and Ancient Mysteries:”

Experimenting with the design of the Saqqara Bird, Gregories found that without a tailplane which he believes the Saqqara bird never had, the model was way to unstable to achieve flight. But even after fitting the object with a tailplane, the results were unconvincing. Therefore, Gregorie concluded that the Saqqara Bird was most likely either a weather vane of a child’s toy.

Furthermore, as Gregorie noted, the Saqqara bird will not fly without a tail or even with the scaled tail fitted. When trying to make the object fly, the results were always the same: “a pitch up if the model is launched at its gliding speed and a pitch down if launched faster, followed by a tumbling motion.”

Evidence that the Saqqara bird may have been used as a weather vane comes from bird depictions on the mastheads of boats and ships present on reliefs at the Temple of Khonsu at Karnak.

This means that although the Saqqara Bird does seem to feature a few aerodynamic properties, considering the object as evidence of ancient Egyptian aircraft seems unlikely.

Summa summarum? The Saqqara Bird was most likely a weather vane, as it points directly and steadily into the wind and does not seem to veer from side to side.