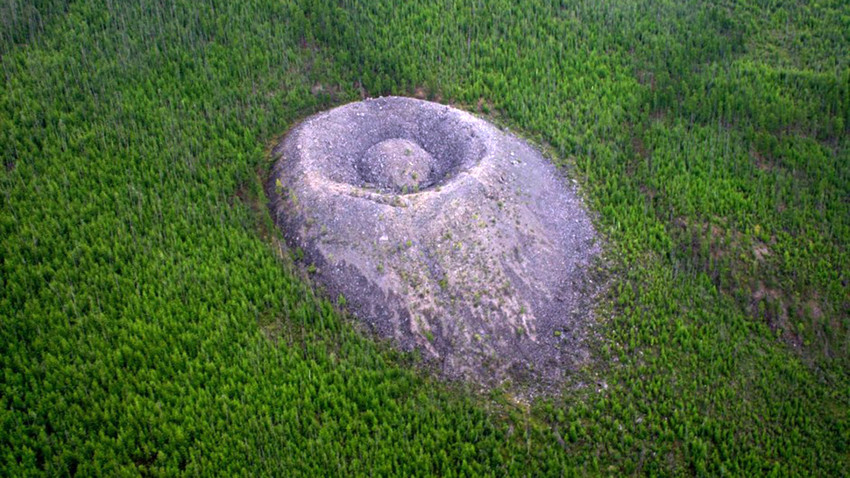 What landed here - a UFO or a meteorite? The Siberian "Living Crater" remained unexplored until the beginning of the 21st century, but Russian scientists seem to have finally found an explanation.

A dark dark mountain rises above the bright green landscape of the dense Russian taiga. Looking like a giant speaker – 40 meters high and more than 150 meters wide – the unusual Siberian “Living Crater” can be seen in a remote area in the northern part of Irkutsk, 210 km north of the city of Bodaybo.

The Siberian Living Crater was discovered by accident when Russian scientist Vadim Kolpakov was sent to the region to do tests and research in 1949. Previously, only locals knew about the crater but did not dare come close to see it.

Back in the day, the locals called the location the “Fiery Eagle’s Nest” and considered it a bad place that even animals avoid. Some who visit the area die in strange ways – even pets disappear without a trace. What is the mystery behind this crater and is there a rational explanation for this whole mystery?

3. Vadim Kolpakov thought he was insane when he discovered the crater

At first, the scientist could not believe his eyes. His initial thoughts were that this was an old mine and he even considered the possibility that there may be people working inside. Then, he considered the option that this might be a great archaeological discovery.

A closer examination showed that the crater is a large pile of broken limestone blocks with a diameter of about 160 meters, with an approximate mass of 1 million tons. The crater is called “Patomskiy” (named after the nearby river), but further exploration began only in the 2000s due to a lack of funding.

5. Theories about the origin of the Siberian Living Crater range from nuclear reactions to UFOs

The secret of the “Fiery Eagle’s Nest” is fueled by various theories – from an alien ship to an underground nuclear reaction. Some people, including Kolpakov himself, supported the idea that the crater was formed by a meteorite that fell into the valley – people believe it may be a fragment of the Tunguska meteorite that fell in the Siberian taiga in 1908. Others suggest that the crater is a volcanic structure formed by gas jets of considerable depth.

6. The first funded expedition ended in a terrible way

The first complex scientific expedition, which visited the area in 2005, found no answers. Unfortunately, the leading scientist died of a heart attack – a tragedy that some consider a bad omen.

The next expeditions occurred in the coming years (2006, 2008, 2010) and were a little more successful. The material collected from the area showed that the crater was formed about 500 years ago (earlier than the Tunguska meteorite) and that it has an annular structure with separate zones formed at different times.

Scientists eventually rejected the meteorite theory and the cryogenic hypothesis (assuming the crater was formed by freezing water) and concluded that the Patomskiy Crater was formed by a steam explosion and the disintegration of rocks and heated rocks.

9. Anomalies near the crater

The Siberian Living Crater undoubtedly is shrouded in mystery despite the scientific expeditions. One of the most curious anomalies surrounding the crater is the abnormal rate at which trees grow. It is not common for all trees in the region, only to those at a short distance from the Patomskiy crater.

10. Some believe that something is buried within the center of the crater

There is still no explanation for the strange events that are happening in the vicinity of the crater. Apart from the magnetic anomaly, which was discovered during one of the first expeditions, there is no confirmed evidence that something large was “buried” in the center of the crater.

Regardless of the theory, we choose to believe, the crater will probably remain one of the most mysterious places in Siberia.