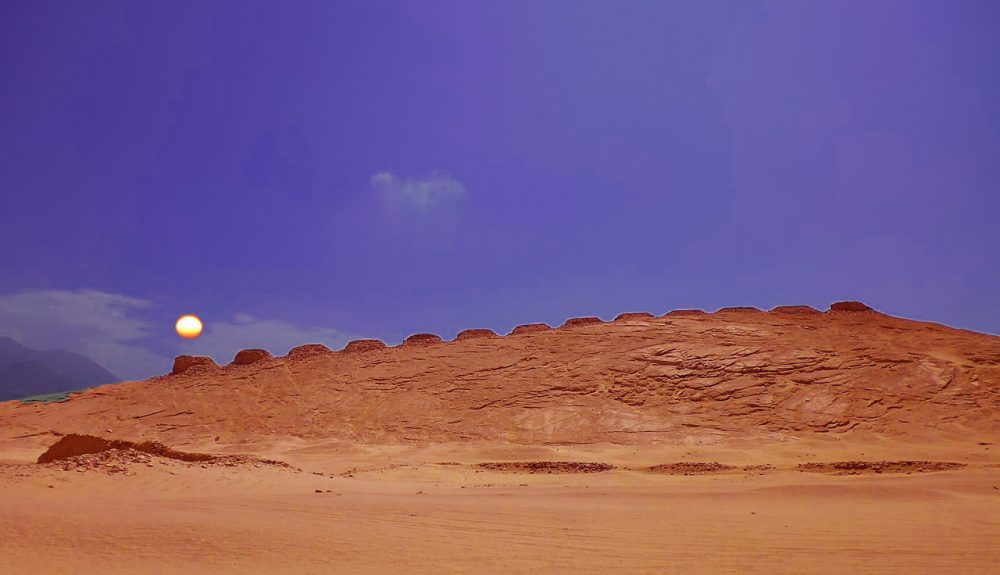 This is the oldest Astronomical observatory in the American continent, and most people have never heard about it.

The thirteen towers of Chanquillo are considered the oldest astronomical complex in the Americas.

Thousands of years ago, complex cultures developed around the world. Independently and without an apparent contact, great civilizations came into existence. They built sprawling cities, some of which became great metropolises. They built temples, plazas, and pyramids.

But in addition to the many architectural wonders that the pyramids and temples of the ancient world may be, we must not fail to mention the numerous ancient astronomical observatories built around the globe.

Thousands of years ago, humankind looked to the stars for answers, just as we do today.

Our ancestors who lived on Earth thousands of years ago likely faced the same dilemma as we do today when asking where we come from, where we are going, and whether there is anyone else out there?

Just as we look towards the stars for answers, trying to understand what else is out there, the ancients did so too.

Today, we use advanced observatories, telescopes, and spacecraft when looking at the stars.

But even without advanced technology, we have still not been able even to understand our place in the cosmic neighborhood, let alone answer the most critical questions of them all; is there life elsewhere?

The ancients, too, observed the stars, but without today’s technology. Instead, they built intricate stone monuments–ancient observatories–that allowed them to keep track of time and observe various cosmic phenomena.

It has been argued, recently, that the oldest temple on Earth–Göbekli Tepe–located in present-day Turkey, may not have been a temple at all, but a very complex and ancient astronomical observatory; if this is the case, then Göbekli Tepe proves that already 12,000 years ago, ancient people had powerful reasons to study the stars.

For thousands of years, the ancients observed the stars. These observations helped not only develop calendars, religions, and myths but helped ancient man understand that there was more than just this planet. Although they may not have had the astronomy knowledge we have today, our ancestors were extraordinarily talented and gifted astronomers.

In Peru, we see some of the finest examples of ancient societies that developed great knowledge.

Chankillo and the thirteen towers

One of the most fascinating astronomy examples in Mesoamerica is found at an archaeological site in Peru called Chankillo.

Also dubbed Chanquillo, the site is considered the oldest solar observatory in America and one of the world’s best-preserved observatories.

The astronomical complex, which is more than 2,000 years old, comprises thirteen towers aligned from north to south. The 13 towers, which are between two and six meters high, are lined north to south along the crest of a hill.

On December 21, during the summer solstice in the southern hemisphere, the Sun rises to the right of the first tower on the far right. As the year progresses, it moves between the towers to the left. You can tell what date it is by seeing which building coincides with the Sun’s path at sunrise.

On June 21, or the winter solstice in the south, the Sun rises from the left of the last tower on the far left. Then, the Sun moves to the right, to come back again in December, moving through the tower on the far right.

Two of the site’s leading researchers, Iván Ghezzi and Clive Ruggles, explain that the thirteen towers served to mark the solstices and equinoxes with great precision, and in general, to mark the cyclical movement of the Sun through the year, indicating the advanced knowledge of astronomy, for practical and ritual purposes, of the ancient Peruvians.

Its construction reveals that the knowledge of astronomy existed in the region before the Inca Empire. It also shows that religious rituals related to astronomical phenomena were performed there and that astronomy greatly influenced societies in ancient times.

Experts have long overlooked the importance of Chankillo. This is perhaps unsurprising as we had no idea of the importance astronomy played within the ancient societies of Peru.

According to historians, it was believed that the first solar observatories were constructed in the Coricancha region, near Cuzco, or had been built by the Moche culture, 600 years after Chankillo.

However, the so-called “pillars of the Sun” that marked the seasons and the time of planting in the Cuzco region have been erased over time, and their precise location is unknown.

Chankillo is a much older monument on the Peruvian coast and appears to have been built to facilitate sunset and sunrise observations.

Archaeological excavations have revealed that in the constructions of the astronomical complex, the ancient people left offerings of ceramic warrior figurines and ornaments that appear to be symbols of distinction, suggesting ritual practices on the site, as well as the existence of well-developed social classes.

The importance of the Sun

According to the scientists, the worship of the Sun and the cosmological customs of Chankillo may have helped legitimize the authority of an elite class, as happened with the Inca empire two millennia later.

According to Luis Jaime Castillo, an archaeologist at the Peruvian Pontifical University, Chanuqillo is a clear example of a “monumental calendar.”

It isn’t easy to think about what else the observational towers may have been used for. Their presence reveals that very advanced measurement techniques existed 600 years before the Moche culture. This tells us that other things may have happened that we didn’t know about.

Astronomical observations in the region were not only related to religious practices. The practical need for the inhabitants of that region to have a structure like the Chankillo solar observatory is evident.

According to experts, such a monument may have helped humankind develop in the region. Agriculture was crucial at the time, and in that area, it depended on the irrigation provided by the rivers. The solar observation was necessary to know when to plant the crops.

Chankillo covers four sq. km and includes various occupations and several monumental stone and mortar constructions. As revealed by UNESCO, many of its structures were originally plastered and painted with ochre, tan, yellow and white, sometimes bearing painting or textured with finger impressions.

The location of Chanquillo, its structures, and astronomical towers was not randomly placed. In fact, it has been argued that the area where the observatory stands were carefully chosen in ancient times. The towers stand in an exceptionally beautiful place with an appropriately low natural horizon for sky observation.