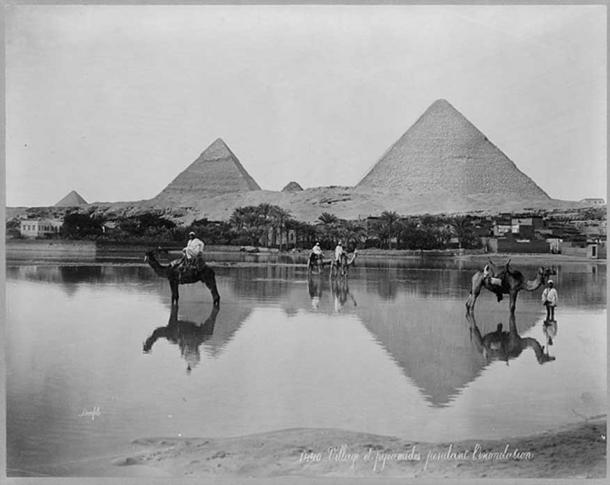 A stunning collection of 25 rare images that show the wonders of ancient Egypt, its majestic pyramids, and the mysterious Sphinx.

The Great Pyramid of Giza, its two neighboring, towering pyramids, and the monolithic statue of a monument carved with the body of a lion, and the head of a human, are a true wonder of the ancient world.

Not a single place on Earth features the type of monuments we see at Giza both in terms of size and complexity. There is not a single ancient site that contains that much stone and that much wealth of history.

The pyramids and the Sphinx are ancient encyclopedias written in stone.

It’s not just the size of the great pyramid of Giza that baffles explorers, adventurers, tourists, and scholars, it is the cumulative view of the Giza Pyramid Complex that leaves an imprint in the memory of anyone who visits.

Of all the problems concerning the pyramids of Egypt, it is their construction that is the most puzzling.

Just as puzzling as it is today, it was equally so in ancient times. Even ancient Roman writer Pliny who condemned the pyramid as an “idle and foolish exhibition of royal wealth” found much to wonder when speaking of the pyramids.

He wrote that “the most curious questions is how the stones were raised to such a great height.”

And that is perhaps one of the greatest and most asked questions when it comes to the Great Pyramid. The Great Pyramid of Giza was built with approximately 2.3 million blocks of stone.

One cannot just point out one extraordinary feature of the Giza complex, because everywhere where one turns, there are secrets waiting to be uncovered, stories waiting to be told, and history waiting to be revealed.

More than 4,500 years ago, the Great Pyramid of Giza signals the zenith of the ancient Egyptian pyramid Age. The successful completion of the Great Pyramid left a profound imprint on later Egyptian history, but also laid down the foundation not only for future pyramids but for future temple complexes which by the time of Khafre were extensively redesigned and redeveloped.

After the third-largest pyramid at Giza was completed; the pyramid of Menkaure, pyramid building techniques, and quality, in general, began to decline across Egypt.

The pyramids that followed were not built with that much passion and love as the previous structures. The importance of the ancient structures also declined, and not much care was given to structures that in the time following Menkaure, were already ancient to the ancient Egyptians.

The importance of the pyramid also declined, and more effort was put into temple-building than pyramid building.

In fact, the truly gigantic stone pyramids were built over the course of only three generations in Ancient Egypt: Sneferu Khufu and Khafre.

Pharaoh Sneferu, for example, built three pyramids that contain more than 2.5 million cu. meters (124 cu. feet) of stone. All other ancient Egyptian pyramids combined, excluding satellite pyramids and queens’ pyramids, contain only 41 percent of the total mass of the pyramids built by Sneferu, his son Khufu and his grandson Khafre.

Although Menkaure still used massive, multi-ton stones in the construction of his pyramid, Menkaure’s structure contained a total mass less than that of the first pyramid in Egypt, the Stone pyramid of Djoser.

After the pyramid boom during the fourth dynasty, pyramid building declined in Egypt. During the fifth and sixth dynasties, Pharaohs still built pyramids but on a much smaller scale and with much smaller stone and a core of stone rubble fill.

This signalized an inferior pyramid construction, where the ancient Egyptians used materials that were much less expensive and easier to come by.

During the First Intermediate Period, pyramid building nearly stopped in ancient Egypt. It was resumed in the Middle Kingdom when the first pyramids were constructed with a core of small and broken stone in casemate and with retaining walls, while later pyramids were then built with a core of mudbrick.

Pyramid sizes were not as standardized as during the old Kingdom, and pyramids lost their importance after the First Intermediate Period. Entrances of the pyramids no longer opened consistently from the north side, and passages in the interior of the pyramids followed entirely off-axis routes leading towards the different chambers inside the pyramid.