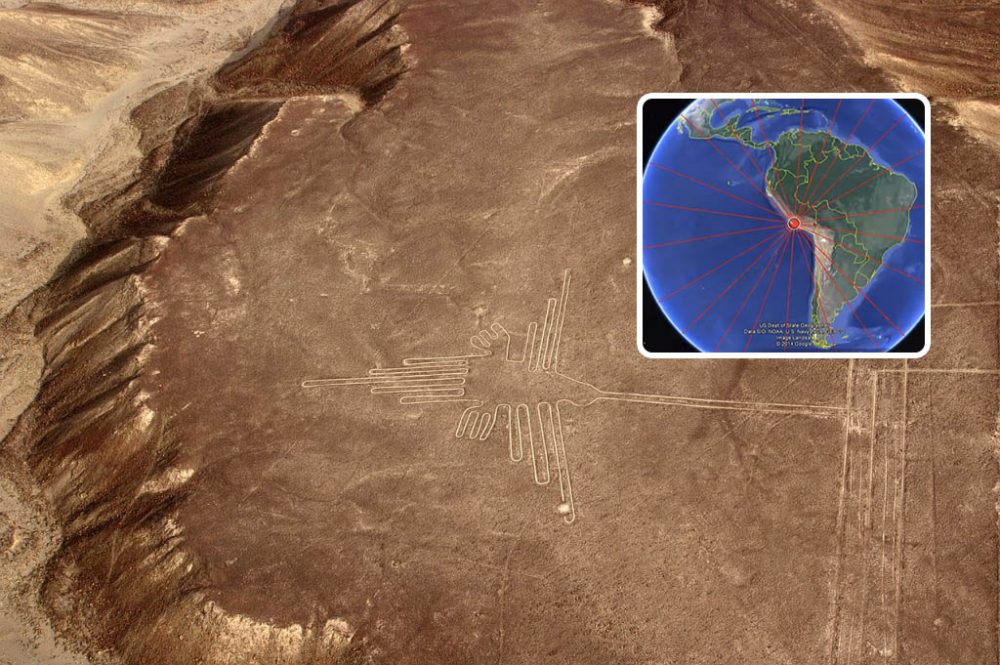 The Nazca lines are an ancient wonder shrouded in mystery.

Located in the Nazca Desert in Southern Peru are a series of incredible geoglyphs etched into the arid surface sometime between 500 BCE and 500 CE.

Believed to have been created by the Nazca Culture, the intricate lines, symbols, and animal glyphs run for several kilometers and are best appreciated from the air or high ground.

The ancient inhabitants of the plateau created the symbols and glyphs by removing the top layer of the reddish-brown iron oxide-coated pebbles revealing a yellow-grey subsoil.

Since weather rarely changes in the region and rain is very rare, the glyphs have survived for thousands of years.

Experts have cataloged more than 800 straight lines, around 300 geometric figures, and as many as 70 biomorphs; designs of animals and plants.

The ancient Nazca people flourished in the arid region of Sothern Peru between the 1st and 8th century A.D.

The first mention of the Nazca lines can be traced back to Pedro Cieza de León, a Spanish conquistador and chronicler of Peru, in his book of 1553, where he mistook them for trail markers.

The lines have been studied for decades.

Paul Kosok, an American historian from the Long Island University, is credited as the first scientist to study the Nazca Lines properly.

The exact reason why the Nazca created intricate symbols, lines, and biomorphs remains a mystery. However, one theory argues the ancients created them to be seen by the ‘deities’ in the sky.

Some researchers have proposed that the Nazca lines were created with a connection to astronomy and cosmology and were intended to act as a sort of an ancient observatory, to point to distant places in the horizon where the sun and other celestial bodies (planets) rose or set during astronomical events like solstices.

Others argue that the lines could indicate water flor or even irrigation schemes, or may even be part of an ancient ritual to summon water.

Phyllis Pitluga, a senior astronomer at the Adler Planetarium, performed computer models of star alignments and argued that the giant spider at Nazca is an anamorphic diagram of the constellation Orion.

Many theories, but not one that has been agreed upon.

And while experts have wondered for decades what the Nazca lines meant, why they were created, and what message the ancients were trying to convey, a YouTuber has created a massive map and plotted the entire Nazca lines worldwide.

Using Google Earth, the YouTuber found that if you plot the Nazca Lines over the entire planet, they convey at one specific point: Angkor Wat, an ancient temple complex in Cambodia, and curiously, one of the largest religious monuments ever erected on Earth, with an area of 162.6 hectares:

What he discovered was an antipodal point.

In mathematics, the antipodal point of a point on the surface of a sphere is the point that is diametrically opposite to it. Call it coincidence or not, it certainly is interesting to see the Nazca lines from this perspective.

You can visit antipodesmap.com for more interesting ‘connections.’