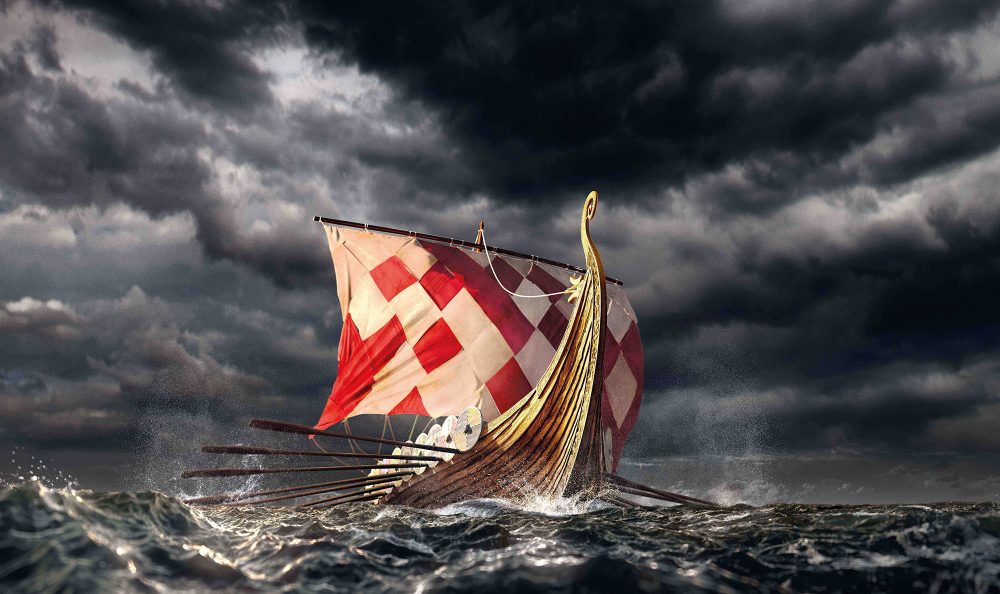 The Vikings visited Northern America some 500 years before Columbus.

Many people believe that the Vikings were a nationality. On the contrary, they were something like a military alliance that managed to seriously expand its possessions.

A classic misconception is that the Vikings were mostly Scandinavians – Swedes, Danes, Norwegians, etc. In fact, there were Baltic Slavs, Western Slavs, and many others in their detachments. In other words, one way or another, almost anyone could become a Viking because it was a way of life.

The first representatives of the Scandinavian Normans to invade Europe were not classic pirates or Viking raiders. They were perfectly normal, peaceful merchants. They arrived on the Old Continent in 725, almost half a century before the large-scale Norman invasions began.

Today, most historians and archaeologists believe that the so-called Viking Age in Europe began in 793. But it all started as peaceful trading. The Viking cultures were actively trading goods with all neighboring countries but over time, several factors forced them to turn to long-lasting large-scale expansions over Europe and even the Middle East and America.

And as we said in the beginning, to be a Viking was a way of life, a profession. They even considered raiding as part of that profession.

Many reasons led the newly created Viking states to seek expansion of their territories, such as the scarcity of arable land, the overpopulation of some coastal areas, the rise of the aristocracy, and others.

The incredible progress that the Scandinavians made in shipbuilding foretold that after the expansion of the Huns and the collapse of the Roman Empire came the era of the Vikings.

The first to invade Europe were the Danes. They went to England and Ireland, the main target for them were the monasteries full of treasures. Later, they began to attack the European coast from Denmark all the way to the Netherlands.

In 845 the Vikings reached and plundered Paris. They went deep into the land through the rivers, using many mobile ships that waded shallowly in the water. In 850, Viking armies began wintering in England, gradually settling there.

The Vikings from Sweden sailed east and were known as merchants. They crossed the Baltic Sea and used many of Europe’s waterways – rivers such as the Volkhov, Lovat, Dnieper, Volga, and others. They reached as far as the Black Sea and Byzantium, where they traded with the locals.

Over the years, Vikings from various Scandinavian countries have reached farther and farther. From attacks on Portugal, Spain, Italy, and North Africa, to the conquest of Seville and the establishment of their own state on French territory. And even running a successful trade in Baghdad. This shows that they not only achieved everything with a sword but also knew how to conduct good politics, often even accepting the traditions and religion of the places they visited.

Vikings: The first colonizers of America?

Did Christopher Columbus really discover America or were Vikings the first to reach the new world? According to some historical sources, a Viking raiding party reached North America 500 years before the Italians.

Around 1000 AD, Viking sailors reached the Labrador Peninsula (part of Canada) and founded their own settlement called Vinland.

According to historians, it was the Norwegian Vikings who embarked on the more precarious voyages. They headed north and reached Iceland. In 985 they founded a colony in Greenland.

The founder of the settlement is known as Eric the Red. According to his saga, his son – Leif Erikson, discovered America by chance. While he was on his way back to Greenland from Norway, his ship sailed off course. Little did they know that they would find a new continent.

Another version of the story tells that Erikson had already heard tales of this continent and had every intention to search for it. And he did find it.

Different historical sources claim that the Vikings did create settlements on the new continent but the actual location of Vinland has not yet been determined.

The only evidence that Vikings did find America 500 years before the Italian or Spanish are the remains of a Medieval Settlement on the Canadian island of Newfoundland called L’Anse aux Meadows.

Other than that, historians have not officially accepted the version that Vikings discovered America before the later Europeans. With this said, how would Vikings write about this new land if they hadn’t truly found it?

Moreover, Greenland is much closer to the territories of Canada than it is to Europe, right? I believe there is no doubt that the Vikings reached North America at some point, even if it was not exactly Leif Erikson that did it first. Historians simply need to find more evidence of these voyages as it is undoubtedly out there.