There are ancient monuments, and then there’s the Sphinx. Like many others, I call it The Vigilante, or the Guardian of Giza.

Also dubbed Abū al Hū meaning the Terrifying One, the Great Sphinx of Giza is a limestone statue unlike any other.

Its exact meaning remains unclear, but the ancient Egyptians considered it an incarnation of the sun god Horakhty, “Horus on the horizon,” a god also associated with the early dynasties. Horus was the god of the rising and setting sun, specifically the god of the east and the sunrise.

It is an archeological wonder, and it’s shrouded in mystery.

The Terrifying one, as the ancients would call it, is also considered a guardian of lost knowledge, and there are those who are convinced that the monolithic statue hides more than just its origin. Deep beneath the surface and through secret entrances that have been blocked off in the distant past, there may be an entire world of secret chambers waiting to be uncovered.

Its exact age remains an enigma. Its purpose is shrouded in mystery. There isn’t a single historical document that tells us who erected/carved it. It is heavily damaged as well as eroded, but nonetheless, it is a true wonder.

It is said that several entrances that lead into the Great Sphinx, and some have allegedly been uncovered throughout the years.

One of them was sealed off in 1926 by Emile Baraize during restoration work on the Sphinx. This entrance, a shaft at the back of the monument, was first identified by  Johan Michael Vansleben in 1679 and explored in full by Egyptologist Auguste Mariette in 1853.

The entrance is well documented and is mentioned in papers published between the 17 and 19th centuries.

Archeologist Auguste Mariette saw this opening as a natural fissure, although other scholars have since argued it may be more than just that.

The mysterious ‘tunnel’ runs through the body of the Sphinx and leads into a mysterious void found beneath the state.

And although this void may be nothing more than just one of the many natural channels that run beneath the Giza plateau’s limestone, there’s evidence to suggest these tunnels, cavities, and chambers were identified by the ancients and eventually expanded in the distant past.

If these mystery voids were expanded by ancient and, the question is why? What did the ancients want to achieve with bigger subterranean spaces? Did they deposit artifacts beneath the surface? Is it possible we are looking at burial chambers?

But the Sphinx, strangely, has more ‘entrances’ than we have ever imagined.

One of them is located on the top of the head of the Sphinx, and several authors have claimed that this entrance too may lead towards a world we’ve never imagined.

What this subterranean world may contain is a mystery. But there is ample evidence that suggests it exists. The head of the Sphinx is said to lead towards a smaller chamber to the statue’s front. Evidence of the existence of said cavities beneath the statue was uncovered in 1987 by a Japanese group of scientists from Waseda University.

Under Sakuji Yoshimura’s direction, the scientists carried out an electromagnetic-sounding survey of the Khufu Pyramid and Sphinx and found SEVERAL cavities and tunnels. 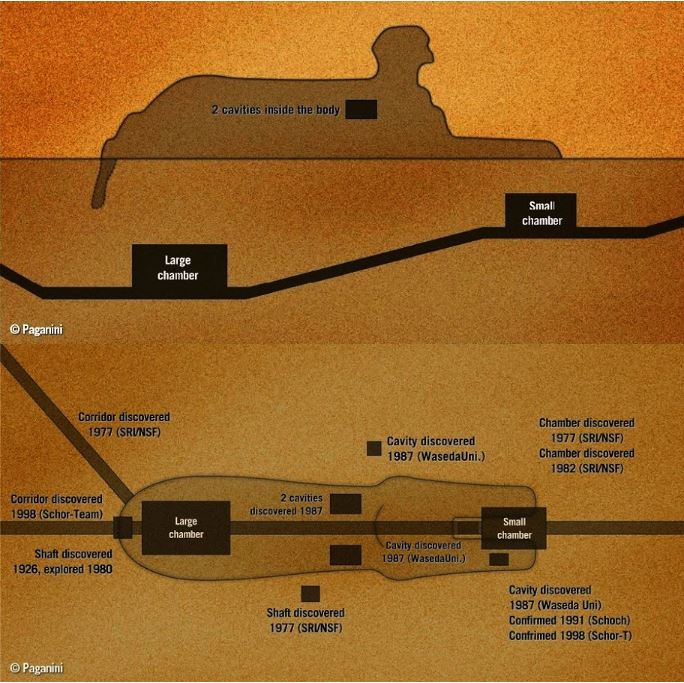 In the book Message of the Sphinx, Graham Hancock and Robert Bauval have argued that the Egyptian authorities, together with certain American archaeologists, have blocked any studies around or beneath the Sphinx, which prevents anyone from researching the underground cavities and revealing the possible secrets that the Sphinx guards.

In general, there is more evidence that supports the idea of the existence of several entrances into the sphinx than there is evidence to indicate there isn’t any.

Thomas Dobecki and John Anthony were just some of the many people who explored the area surrounding the sphinx using scientific equipment.

Seismic refraction, refraction tomography, and seismic reflection revealed subsurface cavities located in front of the sphinx’s left paw and the southern flank of the sphinx. 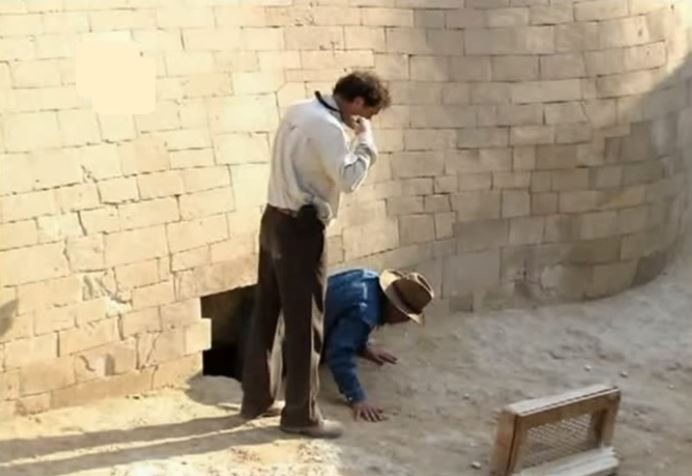 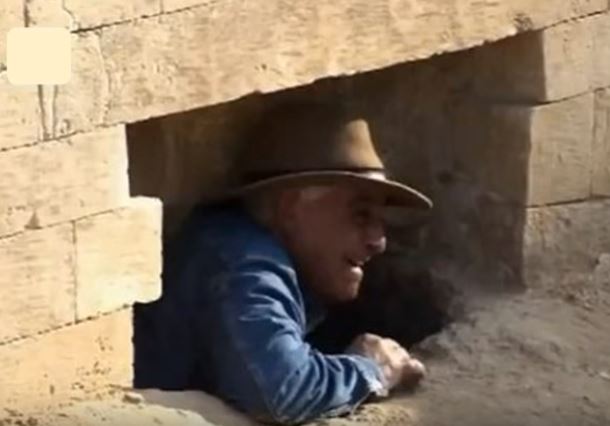 Numerous images can corroborate this.

Seven measuring lines were installed east and west, and four measuring lines north and south to scan the Sphinx over 70 meters from the east to the west and over 10 meters from the north to the south. The bedrock of the Sphinx contains more moisture than that of the pyramid. This would be because the Sphinx locates closer to an underground stream. A response was obtained, indicating a plash of 2.5 to 3 meters below the ground surface near the south-eastern forefoot. On its body, a groove with a width of 2 meters, a depth of 3 meters, and a length of 2 meters was found, which seems to extend underneath the body. At the center of the southern rock, vertical cracks were observed; however, the cracks never affected the bedrock.

Four measuring lines were installed east and west, and five measuring lines north and south to scan the Sphinx over 60 meters from the east to the west and over 7 meters from the north to the south. The northern bedrock seems to contain more moisture than the southern bedrock. The vertical cracks, run east and west across the Sphinx, would be produced naturally. On the body, there is a groove similar to that on the southern part, which seems to extend underneath the body. Under the Sphinx, therefore, there may be a tunnel. Further, near the front elbow, a geometrical cavity (1m x 1.5m x 7m) has been detected, possibly containing metal or granite.

The front of the Sphinx consists of pieces of limestone that have been arranged artificially and paved. With time, the arranged and paved pieces of limestone have been projected and recessed. At first, the team had been concerned about the survey, as the turbulent reflection on the surface might disturb the sensor. Measuring lines (comprising reticulate 10 lines each) were set by meter east and west, and north and south. The inner part of both the forefeet, a geometrical cavity (1.5m x 3m), was detected. The bottom has not been detected clearly, because the bottom may be uneven, or there may be some articles. The cavity seems to extend from the east to the west, i.e., toward the chest; however, an offering table made of granite prevented survey.

At the western part beyond the offering table, two measuring lines were installed for the survey east and west. The surface, which is not made of limestone and has many cracks, was not measured correctly due to violent, turbulent reflection on it. The rough survey has indicated the high possibility of the presence of a cavity 1 to 2 meters below the ground surface. The cavity may be connected to the above cavity located in front of the Sphinx and may extend into the Sphinx. However, if these cavities are separated, it is possible the former cavity located in front of the Sphinx is Sertab, where the statue was installed. [pp. 7-8]

The Sertab mentioned above is more commonly called a serdab, a room in Old Kingdom tombs in which statues representing the ka of the deceased were placed. Eyeholes or slits were often provided so that the ka might gain access to its offerings. There is little reason, however, to think that the Sphinx served as a tomb. (Source)