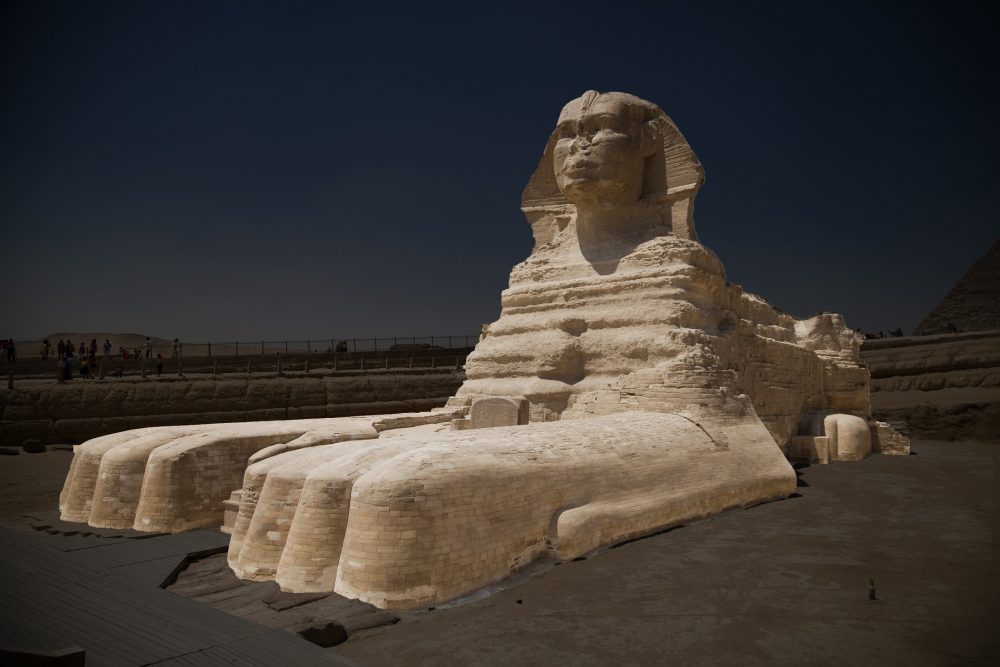 For all we know, the Sphinx could predate the ancient Egyptian civilization.

There is a massive, monolithic statue at the foot of the Pyramids at Giza called the Sphinx. Carved at an unknown time, the statue was shaped with the body of a lion, and the head of a human. Its age remains its greatest mystery.

Evidence of its antiquity are its scars. The statue which is badly eroded and damaged has nonetheless stood the test of time. Shrouded in mystery perhaps even more than the pyramids behind it, the Great Sphinx of Giza is one of the most magnificent statues on the surface of the planet.

We call it the “Great Sphinx” but it is impossible for us to know its original name as there are no written texts found anywhere in Egypt that mention it.

Carved into the bedrock not far from a pyramid scholars attribute to Pharaoh Khafre lies the oldest known monumental sculpture in Egypt. Measuring 73 m (240 ft) long from paw to tail, 20 m (66 ft) high from the base to the top of the head and 19 m (62 ft) wide at its rear haunches, the Great Sphinx of Giza is believed to have been commissioned by Pharaohs Khafre, the builder of the second-largest pyramid at the Giza plateau.

This ancient statue is one of the oldest and largest on the surface of the planet. Rightfully so, it is the center of numerous legends and myths.

Therefore, it is unsurprising to find out that many writers, scholars, and experts in the field argue that the Sphinx is much older than the 4,500 years allocated to it by mainstream Egyptologists.

For all we know, the Sphinx may have been carved at a time when mainstream history tells us there were no sophisticated civilizations on Earth.

Despite the fact that mainstream scholars have refused to acknowledge the possibility of the existence of such a civilization, we already have evidence that more than 11,000 years ago, perhaps even more than 13,000 years ago, Earth was inhabited by a culture that already was capable of quarrying stones weighing several tons, and creating sophisticated, astronomically aligned temples: Göbekli Tepe.

Scientific analysis of the Sphinx has revealed clear evidence of erosion patterns which may suggest that the Sphinx was not caved during the Fourth Dynasty of Egypt, but much earlier with its age ranging anywhere from 15,000 to 5,000 BC.

Although no ancient texts in existence that mention the exact construction date of the Sphinx, studies of the statue, as well as its position relative to the stars, may yield interesting details about the statue.

Since the pyramids at the Giza plateau are profoundly astronomical, it may not come as a surprise that their guardian–the Great Sphinx of Giza–is so too.

As noted by Hancock, if we were to travel to around 10,500 BC and stand where the Sphinx is today, we would be left awestruck by the celestial counterpart of the Great Sphinx: the Constellation of Leo. If we were to stand there at the Giza plateau in the pre-dawn on the vernal equinox, facing east in line with the gaze of the Sphinx, standing right between its paws, we would see that occupying the position of the sky where the sun is about to rise is the zodiacal constellation of Leo, the only constellation int he night sky that resembles the mighty Sphinx and its leonine form.

Whether or not the Sphinx was built at that time is just another theory in an ocean of scientific guesswork. After all, not one single expert in the field can say, with complete and utter confidence when the Sphinx was carved, what its original purpose was, and who it is meant to represent.

Despite disagreement in the age of the Sphinx and its original purpose, Scholars agree that the Great Sphinx is the most impressive sculptural work in the history of mankind.

Egyptologist Miroslav Verner comments on the significance of the Sphinx, reporting on its importance and numerous mysteries:

The Great Sphinx of Giza is more than simply a symbol of ancient and modern Egypt. It is the very embodiment of antiquity and mystery itself. Over the centuries it has fired the imaginations of poets and scientists, adventurers and travelers. Although it has often been measured, described, investigated using the most up-to-date scientific technical means, and discussed at special scientific conferences, fundamental questions remain unanswered: Who built it, when, and why? (234)

Another expert in the field, Egyptologist Selim Hassan wrote in 1949 about the Sphinx:

Taking all things into consideration, it seems that we must give the credit of erecting this, the world’s most wonderful statue, to Khafre, but always with this reservation: that there is not one single contemporary inscription which connects the Sphinx with Khafre; so, sound as it may appear, we must treat the evidence as circumstantial, until such time as a lucky turn of the spade of the excavator will reveal to the world a definite reference to the erection of the Sphinx

The truth is, there is no conclusive evidence whatsoever that links the Sphinx to a specific timeline in history, i.e. 4,500 years ago.

In the book Gods of the Egyptians (1914) Budge also reveals: “This marvelous object [the Great Sphinx] was in existence in the days of Khafre, or Khephren, and it is probable that it is a very great deal older than his reign and that it dates from the end of the archaic period circa 2686 BC.”

Egyptologist Gaston Maspero maintained that the Great Sphinx is so old that it is probably the oldest statue of ancient Egypt.

Mainstream Egyptologists are convinced that Khafre carved the Sphinx during the Fourth Dynasty and that the head of the Sphinx is a representation of the King. But is there really conclusive evidence to support this idea?

If you ask Frank Domingo, a forensic scientist in the New York City Police Department and an expert forensic anthropologist the answer is no.

Domingo took a number of accurate measurements of the Sphinx, performed a number of forensic drawings and computer imaging in hopes of figuring out who the monument depicted. Domingo would eventually conclude that the face depicted on the Great Sphinx is not the same face as is depicted on a statue attributed to Pharaoh Khafre.

The Great Sphinx is ancient. Already to the ancient Egyptians in the time of Ramesses or King Tut, this ancient statue was considered ancient. Its first restoration took place around 3,500 years ago.

Its exact age continues to elude us, but like Hancock and Bauval explained in their book “The Message of the Sphinx,” without access to a time machine not even the most distinguished of Egyptologists can suggest or claim that the Sphinx is a portrait or likeness of Khafre.