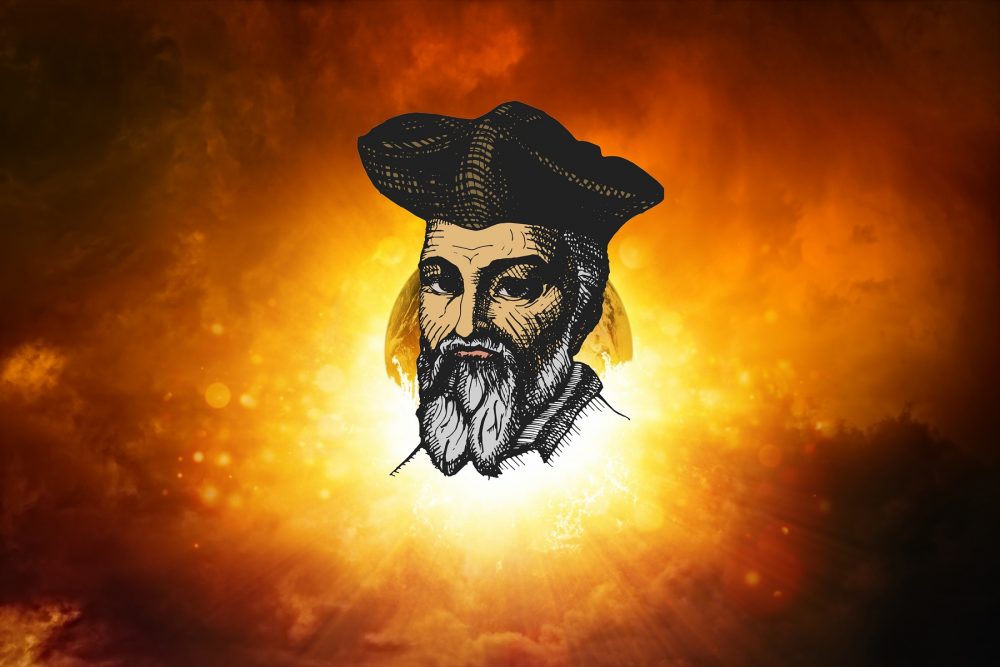 What did Nostradamus "predict" for 2020? Find out here.

Here are the alleged predictions for the year 2020 of a man who is dubbed the greatest seer of all times, Nostradamus.

The French astrologer, physician, and reputed seer is known for his book Les Propheties, a vast collection of 942 poetic, yet mystifying quatrains, that according to many experts predict events of the future.

His book, which has rarely been out of print since the first publication, relies heavily on historical and literary precedent. Since the publication of his book, the French seer has attracted many supporters, who argue he predicted some of the most notorious, history-changing events on Earth.

Despite having millions of supporters and believers across the world, academics firmly reject the idea that he–or anyone else for that matter–had the ability to foresee future events. Skeptics deny the notion that Nostradamus had any supernatural prophetic abilities, suggesting that his alleged predictions are no more than misinterpretations or mistranslations, some of which are even deliberate, and have been fitted and adjusted accordingly to fit major historical events.

Moreover, skeptics point out that the English translations of Nostradamus’ quatrains are often of remarkably poor quality, based on much later writings, composed by writers with little understanding of sixteenth-century French, and often intentionally distorted to make the predictions fit events the translator considered were conjectured to have prophesied.

Nonetheless, his faithful followers point out that many predictions were actually successfully prophesied by the French seer.

Among his most notorious predictions that have supposedly come true, his followers point out that Nostradamus successfully predicted, among other events, the rise of Hitler, the bombings of Hiroshima and Nagasaki, the Assassination of President John F. Kennedy, as well as the Apollo Moon landing.

Here’s the alleged quatrain that is said to have predicted the assassination of President John F. Kennedy:

President John F. Kennedy–believed to be the “Great Man” Nostradamus mentions, visited Dallas in November of 1963 where he was shot by “a thunderbolt.”

The Brother of John F. Kennedy, Bobby Kennedy, was assassinated after midnight on June 5th, 1968.

Here are more examples of his quatrains predicting supposed events of the future.

As noted by his supporters, Nostradamus is said to have made reference to the Astronauts that traveled to the Moon: Luna (Latin). Nostradamus further writes that the astronaut (he) will be captured. The astronauts were captured as they set foot on the moon, as the moon landing was recorded for the whole world to see.

In addition to the Moon landing, Hiroshima and Nagasaki, Nostradamus is thought to have predicted the terror attacks on 9/11, the French Revolution and the Great Fire of London.

Whether or not Nostradamus’ quatrains were intentionally masked in a way that they do predict the future remains a mystery. It can be said that believing, or disbelieving in his predictions is a personal point of view, although some of them do arouse our imagination.

So, what did the great French seer predict for the year 2020?

In addition to “foreseeing” great Earthquakes in Northern America, the French seer predicted that geological disaster will plague the “New World.”

But not only will there be geological catastrophes according to Nostradamus. He is also said to have predicted how a great Economic Crisis will strike 2020 where bankruptcy, recession and dark times for the global economy will mark the year.

Curiously, the French seer is said to have successfully predicted the Economic Crisis of 2008.

The French seer is also said to have predicted one of the most important events that have impacted 2020: the Corona Virus outbreak. The terrifying virus which started in 2019 has been dubbed as a potential global catastrophe by the World Health Organization, and Nostradamus’s followers point out that the French Prophet may have predicted it hundreds of years ago.

Here’s the alleged quatrain where Nostradamus predicts the Coronavirus:

The great plague of the maritime city Will not cease until there be avenged the death Of the just blood, condemned for a price without crime, Of the great lady unwronged by pretense.

Whether or not Nostradamus really predicted the coronavirus outbreak is up for debate, and as many of his other predictions, this too can be fitted and adjusted to fit any other historical event.

So, what else holds 2020 according to Nostradamus?

It is believed that the French seer also foresaw an abrupt rise in sea level for 2020. Climate change has been an ongoing global issue for several years. Nostradamus is thought to have predicted that global warming would become pretty bad in 2020 and that the global sea level would change the world abruptly in 2020. Nostradamus supposedly prophesized that many parts of Antarctica will melt causing the global rise in sea levels by several meters.

The French seer is also believed to have predicted how powerful storms that will turn into major hurricanes will appear in 2020. The United States will supposedly see some of the most powerful tornadoes appear in 2020.

Curiously, in January of 2020, researchers found that there is surprisingly warm water on the underside of Antarctica’s Doomsday Glacier the Thwaites Glacier. This is one of Antarctica’s fastest melting glaciers. Researchers have revealed that its melt already accounts for about 4% of global sea rise

If the rise of global sea levels wasn’t enough, the French seer supposedly predicted that 2020 would see a new, third global conflict arise.

In the city of God, there will be a great thunder. Two brothers torn apart by Chaos while the fortress endures. The great leader will succumb The third big war will begin when the big city is burning.

This quatrain was interpreted by Nostradamus’ followers as a possible new World War. WWIII?