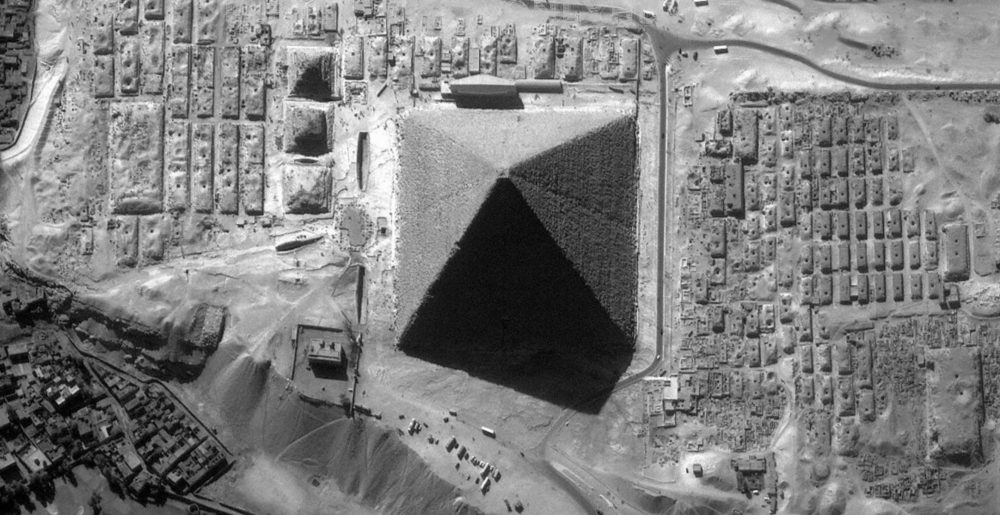 If we take a close look at the three pyramids at Giza, we will notice clearly visible concavities demarcating what appear to be eight, instead of four sides.

There are thousands of pyramids scattered across the globe, ranging from small pyramids of only a few meters in height to colossal structures rising more than 100 meters into the air. Of all these ancient structures, some of which were erected more than 5,000 years ago, Giza’s pyramids hold a special place in history.

Despite not being the largest in the world, nor the oldest for that matter, Giza’s pyramids have always attracted distant visitors for different reasons.

Some explorers are left awestruck by the immense size of the Great pyramid, for example. Others are left baffled by the extreme precision and care by which these pyramids were built. Others fall in love with the many mysteries surrounding the pyramids. A fourth kind would say that their history is worthy of praise.

Whatever the case, Giza’s pyramids hold a special place in the history of the human race.

In fact, we can trace the birth of the ancient Egyptian pyramid to a time long before Khufu and the Fourth Dynasty of Egypt.

Mainstream Egyptologists tell us that the journey of a thousand years of pyramid building in Egypt began with one pharaoh and his young royal architect.

King Djoser and his royal vizier Imhotep revolutionized ancient Egyptian architecture in more ways than one.

Djoser, a Pharaoh of the Third Dynasty of Ancient Egypt, tasked his young architect to take to Saqqara and plan a monument unlike no other. Imhotep did not disappoint. Luckily for him, Djoser recognized his ideas and refreshing talent and gave him free hands to plan the monument.

What started of as a slightly altered mastaba eventually turned into a structure that we today call the pyramid of Djoser.

Imhotep essentially stacked six square mastabas on top of each other. Each structure was smaller than that which lay beneath it. After six steps, the monument was finished when its builders covered the pyramid in highly polished white limestone.

The result? A monument resembling a stairway to the stars. The Step Pyramid of Djoser is regarded as the first colossal stone building of Egypt and the first pyramid in the history of the ancient Egyptian civilization.

However, even though the Step Pyramid revolutionized Egypt in terms of architecture, history did no see many Step Pyramids followed Djoser’s.

Although a few Pharaohs after Djoser tried mimicking his striking accomplishment at Saqqara, they failed, and their pyramids were never completed.

This remained so until the very start of the Fourth Dynasty of Egypt when Pharaoh Sneferu took to the throne of the land of Pharaohs.

Sneferu is regarded as the most fantastic pyramid builder in the history of Egypt, after having built–successfully–three pyramids that once again revolutionized the architecture in ancient Egypt.

Three pyramids are the product of Sneferu: One at Meidum and two at Dahshur.

The one at Meidum can be seen as an experimental pyramid that was finished as a Step Pyramid but attempted to be transformed into a smooth-sided one.

The two pyramids at Dahshur, the Bent Pyramid and the Red Pyramid, are a massive lead forward in pyramid building techniques.

The Bent pyramid is unique because of its shape. It also signals a better understanding of the angle at which a smooth pyramid must be built to avoid it collapsing. The pyramid rises from the desert at a 54-degree inclination, but just above 47 meters, the builders opted for a much shallower inclination of 43 degrees.

This mistake was not repeated when the builders erected the Red Pyramid.

Regarded as the first successful attempt at constructing a smooth-sided pyramid, the Red Pyramid rises from the desert at a 43-degree inclination, just as the upper part of the Bent Pyramid.

Until the Great Pyramid of Giza’s successful completion, the Red Pyramid remained the tallest pyramid ever constructed in Egypt.

The Great Pyramid was supposedly commissioned by Khufu, Sneferu’s successor to the throne. This supermassive structure is thought to have been built with around 2.3 million stone blocks, some of which were hauled as far away as Aswan, located 800 kilometers away.

The total weight of the Great Pyramid is calculated at around 6.5 million tons.

It marked the peak of ancient Egyptian pyramid building, and no structure like it would ever be built in Egypt. But this pyramid is not unique just because of its mesmerizing size.

The Great Pyramid of Giza is regarded as the only eight-sided pyramid in Egypt. This stunning

The phenomenon was spotted for the first time in 1940 by accident as British Air Force pilot, P. Groves, was flying over the pyramid and noticed the concavity on the Pyramid, and decided to take a picture of what he had observed the pyramid had eight sides and not four.

Although this characteristic was photographed for the first time in 1940, this feature was first mentioned in La Description de l’Egypte in the late 1700s by Sir William Matthew Flinders Petrie, an English Egyptologist and a pioneer of a systematic method in archaeology and preservation of artifacts.

This odd and relatively unknown feature was first thought to have been a mistake or error in constructing the pyramid. However, after Sir Petrie analyzed the concavities, he noticed that it was a deliberate feature added to the pyramid, placed exactly at the center of each face of the pyramid.

However, is the Great Pyramid of Giza the only built this way? Or is there a possibility that other pyramids at Giza were built with similar characteristics?

The second-largest pyramid at Giza is that of Khafre. Though to have been commissioned by King Khafre, Pharaoh Khufu’s successor, his pyramid appears taller than the Great Pyramid because it was built on an elevated part of the bedrock.

It is also the only pyramid in Egypt whose upper limestone casing remains largely intact. With a height of 136.4 meters, the pyramid has a total volume of 2,211,096 cubic meters (78,084,118 cu ft). It is the second-largest pyramid ever built in Egypt, and unlike the pyramid of Khufu, it was built with a much steeper 53° 13′ angle.

If we look at the smaller of the three pyramids at Giza, that of Menkaure, we may see a similar characteristic, which points to the possibility that this pyramid was built with eight and not four sides.

The Pyramid of Menkaure is the smallest of the three pyramids constructed at the Giza Plateau, rising to a height of no more than 61 meters. It is smaller than the Step Pyramid of Djoser, with a total volume of 235,183 cubic meters (8,305,409 cu ft).

Just as its two larger companion pyramids, the pyramid is thought to have served as the eternal resting place for the pharaoh.

If the Pyramid does have eight sides, it would mean that for a reason we are yet to understand, fourth dynasty pyramid builders decided to build their pyramids with eight sides and not four.

The following image shows all three pyramids at Giza, as seen from above.

Although traces of what appears to be eight sides are seen at the Pyramid of Menkaure, they are not as prominent as in the pyramid of Khufu and Menkaure. This may be because of the limestone casing at the pyramid’s summit.

If all three pyramids at Giza were really built with eight instead of four sides, what was the purpose of such characteristics?