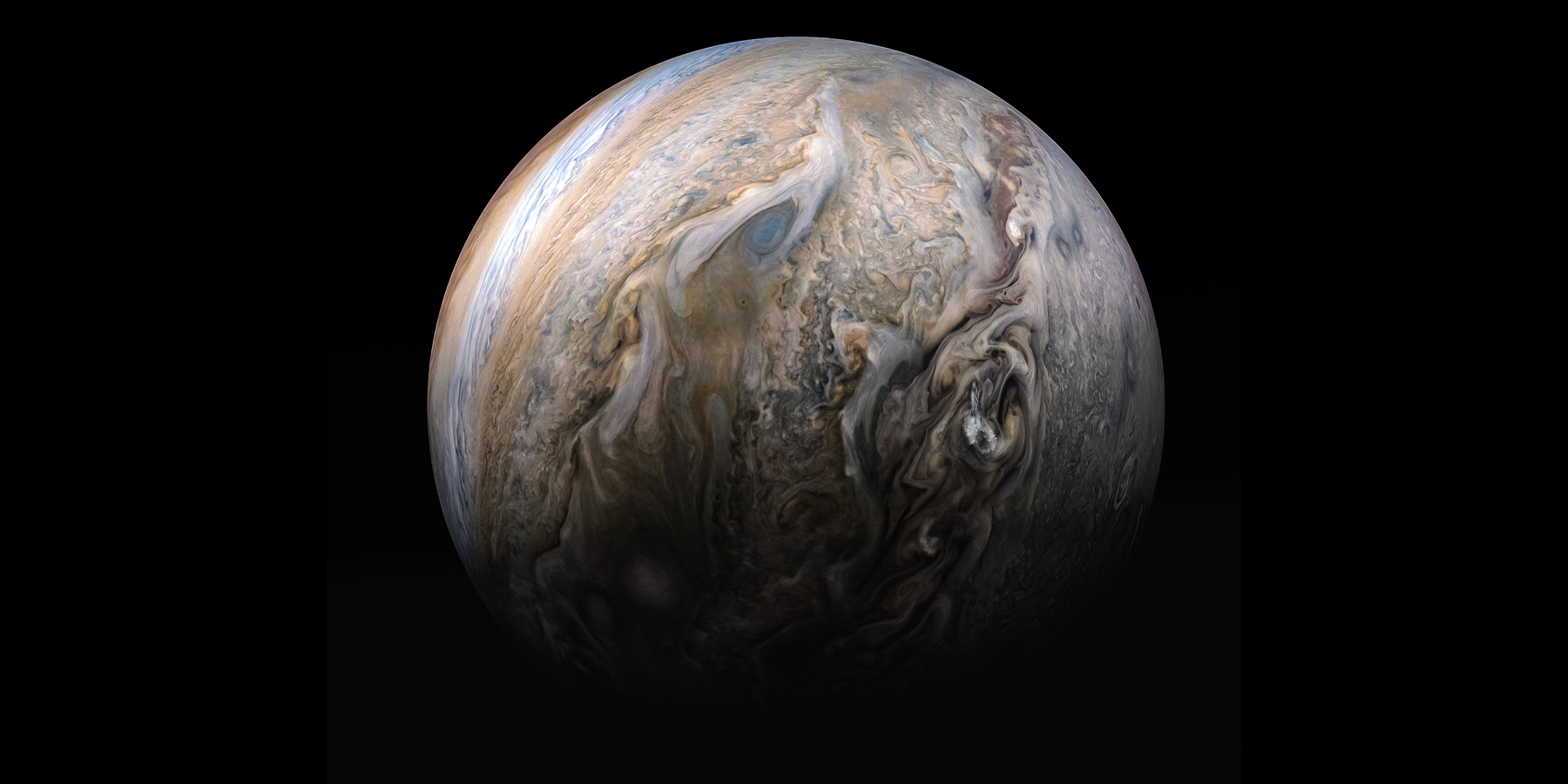 The dozens of images of Jupiter snapped and sent by the Juno Spacecraft truly show the magnificence of one of the gas giants in the Solar System.

If you look at the northwest part of the sky after sunset (southwest in the northern hemisphere), you will find one bright point of light that stands out easily in relation to everything around it. This is the planet Jupiter, shining with an intense and even light.

Today, people can explore this gas giant more than ever thanks to the Juno spacecraft which reached Jupiter’s orbit several years ago after a five-year journey and decades of planning.

The Juno spacecraft has been supplying us with mesmerizing photos and I’ve selected some of the most magnificent shots that will make you see Jupiter in a different way. But to make it complete, we will also discuss some facts about Jupiter in between.

Jupiter is not only one of the brightest objects in the night sky, but also the largest planet in the solar system. It is precisely because of its size that Jupiter is so bright. Moreover, the mass of the gas giant is more than twice the mass of all other planets, moons, comets, and asteroids in our system combined.

The sheer size of Jupiter suggests that it may have been the very first planet to form orbiting the Sun. The planets are believed to have emerged from debris left after an interstellar cloud of gas and dust combined during the formation of the Sun. At the beginning of its life, our then young star generated a wind that blew away most of the remaining interstellar cloud, but Jupiter was able to partially hold it back.

King of the planets

Given the excellent visibility, Jupiter, along with Mercury, Venus, Mars, and Saturn, have been observed since ancient times. Regardless of culture and religion, humanity considered these objects to be unique. Even then, observers noted that they do not remain motionless within the constellation patterns, like stars, but move according to certain laws and rules. Therefore, the ancient Greek astronomers ranked these planets as the so-called “wandering stars”, and later the term “planet” appeared from this name.

It is remarkable how accurately ancient civilizations designated Jupiter. Not knowing then that he is the largest and most massive of the planets, they named this planet in honor of the Roman king of the gods, who was also the god of the sky. In ancient Greek mythology, the analog of Jupiter is Zeus, the supreme deity of Ancient Greece.

However, Jupiter is not the brightest of the planets, this record belongs to Venus. There are strong differences in the trajectories of Jupiter and Venus across the sky, and scientists have already explained why. It turns out that Venus, being the inner planet, is located close to the Sun and appears as an evening star after sunset or a morning star before sunrise, while Jupiter, being an outer planet, is able to wander throughout the sky. It was this movement, along with the planet’s high brightness, that helped the ancient astronomers mark Jupiter as the King of the planets.

In 1610, from late January to early March, astronomer Galileo Galilei observed Jupiter with his new telescope. He easily identified and tracked the first three and then four bright points of light in its orbit. They formed a straight line on either side of Jupiter, but their positions were constantly and steadily changing in relation to the planet.

In his work, which is called Sidereus Nuncius, Galileo confidently and completely correctly explained the movement of objects in orbit around Jupiter. Later, it was his conclusions that became proof that all objects in the sky did not rotate in the orbit of the Earth, which led to the conflict between the astronomer and the Catholic Church.

The weather on Jupiter, like everything else about the planet, is very majestic. Storms are constantly raging over the surface, constantly changing their shape, growing thousands of kilometers in just a few hours, and their winds swirl the clouds at a speed of 360 kilometers per hour. It is here that the so-called Great Red Spot is present, it is a storm that has been going on for several hundred Earth years.

Jupiter is wrapped in clouds of ammonia crystals that can be seen as stripes of yellow, brown, and white. Clouds are typically located at specific latitudes, also known as tropical regions. These stripes are formed by blowing air in different directions at different latitudes. Lighter shades of areas where the atmosphere rises are called zones. The dark regions where the air currents fall are called belts.

Saturn has rings, Earth has blue oceans, and Jupiter has striking, bright, and swirling clouds formed by the very rapid rotation of the gas giant on its axis (every 10 hours). The formations observed on its surface in the form of spots represent the formations of dynamic weather conditions in Jupiter’s clouds.

For scientists, the question remains how deep to the surface of the planet these clouds pass. It is believed that the so-called Great Red Spot – a huge storm, discovered on its surface back in 1664, is constantly shrinking and decreasing in size. But even now, this massive storm system is roughly twice the size of Earth.

Recent observations by the Hubble Space Telescope indicate that starting in the 1930s, when consistent observation of the object began, its size could have decreased by half. Currently, many researchers say that the decrease in the size of the Great Red Spot is happening at an ever-faster pace.

Despite the fact that most of us think of Saturn with its pronounced rings when we mention rings around the planet, Jupiter also has them. Jupiter’s rings are mostly made of dust, making them hard to see. The formation of these rings is believed to have been due to Jupiter’s gravity, which captured material ejected from its satellites as a result of their collisions with asteroids and comets. 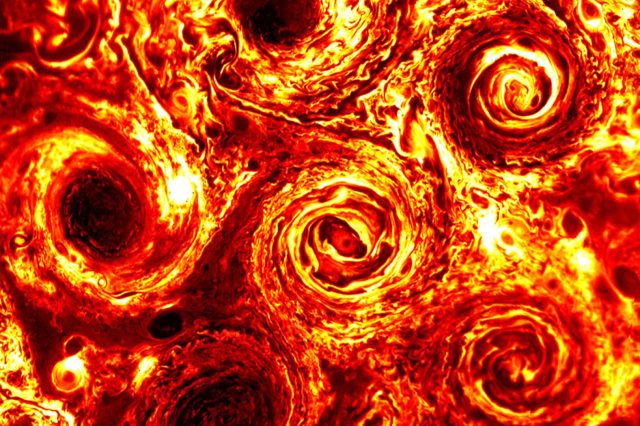