We are accustomed to seeing Giza’s pyramids surrounded by Egypt’s golden sand, the desert, and nothing around them but ancient history, tales of Pharaohs, mummies, and incalculable treasures. And while it may have been so around 4,500 years ago when the largest Giza pyramid was built, the truth is that today, in the 21st century, the entire landscape is different. As times change, so did the landscape.

As Egypt grew, so did its cities, and the entire landscape was altered. What was ancient became fused with modern architecture as satellite images show, Giza is expanding faster than ever before, threatening the sacred location of the Pyramids, the Sphinx, and their temples.

That’s why Egypt is perhaps the most amazing place to see the mixture of ancient and modern ways of life. Everything has been fused.

Today, in addition to being surrounded by the golden sands, the pyramids, temples, and monuments at the Giza plateau are surrounded and even perhaps endangered by the jungle of modern buildings. Giza and the city of Cairo are growing in an accelerated way, and these modern images of the region show what the pyramids are surrounded by.

The Pyramids, their respective temple complexes, and the Great Sphinx of Giza were built on what we call the Giza plateau.

Located at the edge of the Western Desert, around 9 km (5 mi) west of the Nile River in Giza, and about 13 km (8 mi) southwest of the city center of Cairo stand the supermassive pyramids that make up the Giza Pyramid Complex. Collectively, the structures are known as the Giza Necropolis, and it is where the ancient Egyptian pyramid building reached its peak.

The three major pyramids at Giza are the perfection of pyramid building techniques in ancient Egypt.

The Great Pyramid of Giza is the largest of the three. Thought to have been built as the eternal tomb for Pharaoh Khufu, the structure was constructed using approximately 2.3 million stone blocks, some of which originated from as far away as Aswan, located to the south 800 kilometers.

In total, the ancient Egyptians would build a pyramid with a total weight of around 6 million tons, resulting in the tallest human-made building on the planet’s surface, a record that the pyramid would hold for 3,800 years after its construction.

The Sphinx, just as the pyramids, is shrouded in mystery.

Just as there are no ancient texts that mention when, why or how the Pyramids of Giza were built, there has not been one ancient text discovered so far that tells us anything about the Great Sphinx.

We don’t know how old it is, although mainstream scholars are willing to be it dates back to the reign of Khafre, and that the head of the Sphinx resembles the fourth dynasty Pharaoh.

Since there are no ancient texts that speak of the Sphinx, we also don’t know its exact purpose. There are many theories surrounding the Sphinx telling of possible tunnels, chambers, and magazines, not only inside the Sphinx but also beneath it.

Some authors have claimed that these ancient chambers contain anything from a possible pharaoh’s burial to long-lost knowledge pointing to the existence of advanced ancient civilizations that may have existed before the ancient Egyptian civilization.

But those remain nothing more than just theories. Despite this, surveys of the Giza plateau, the pyramids, and the Sphinx have shown there are cavities and tunnels beneath Giza’s structures.

The Giza plateau with its monuments is perhaps the most amazing and mysterious ancient site in all of Egypt, not that there aren’t other wonderous historic sites.

The modern-day city of Giza, west of the Nile River around 5 kilometers away from the Capital city of Cairo, is located less than 20 kilometers north of “The Beautiful Wall,” or Mn Nefer in ancient Egyptian, the city that was the capital of the first unified Egyptian state form the days of the first Pharaoh, Narmer.

As ancient Egypt went through different times, it was conquered by different cultures. Egypt was once under the control of the Persians, the Greeks, Romans, and Byzantines. South of what is now Giza, there stood an ancient Byzantine village called Phylake. It shouldn’t be confused with Giza. The Egyptians dubbed the area Tipersis which may correspond to the Persian influence.

The city of Giza has always been an important part of Egypt and ancient Egyptian history not only because of its unique monuments but due to its close location to Memphis, the ancient city that acted as ancient Egypt’s Pharaonic capital during the old Kingdom.

As noted by Manetho, the city of Memphis was founded by Phaaph Menes and was the country’s capital during the Old Kingdom. Throughout ancient Egyptian history, the city of Memphis remained of great importance, mostly due to its strategic position at the Nile Delta’s mouth.

We are accustomed to seeing images of the pyramids portrayed in a way indicative of them being surrounded by nothing other than the desert.

However, modern times have taken over Giza, and the pyramids are now a small part of the area preserved and protected from the growing jungle of buildings and the 21st century.

Let’s hope that we will understand that ancient sites deserve our respect and attention. Safeguarding history and ancient monuments for future generations are imperative for our civilization. 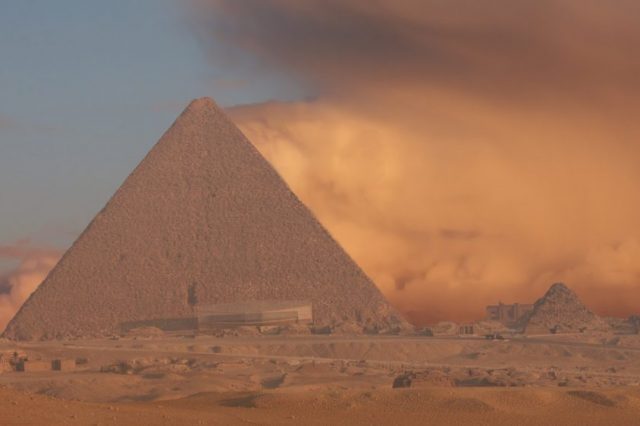