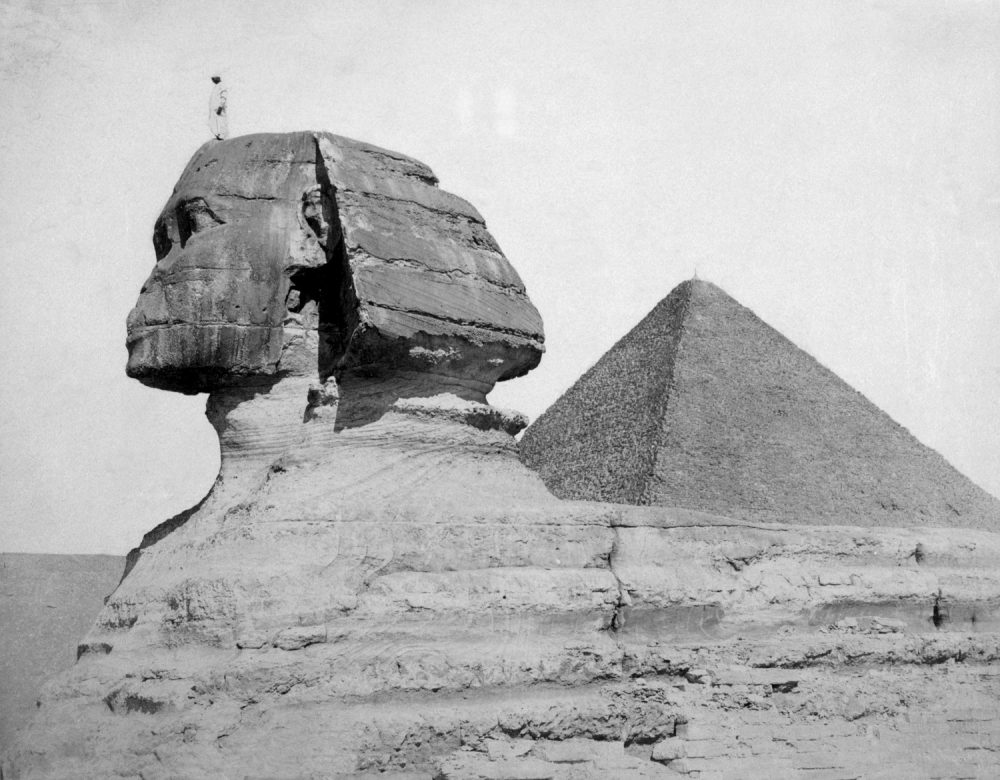 Of all the ancient monuments that have been built on Earth thousands of years ago, there is one that both excites and causes confusion among scholars.

Located in the arid landscape not far from Cairo, Giza’s Great Sphinx is a stone-made encyclopedia encompassing several thousands of years of mystery.

If it is a mysterious and incredible statue for us today, you shouldn’t be surprised to know that it was just like that for people in Egypt thousands of years ago.

That’s why some refer to the Sphinx of Giza s being older than ancient… if that make any sense?

And that’s perhaps what best defines the Great Sphinx, is that it’s a statue so old that even the ancient Egyptians referred to it as an ancient statue of a time long gone.

Mainstream scholars have argued for decades about the true purpose, origin, and meaning of the imposing monument.

And although this massive statue has undergone countless restorations, some of them even thousands of years ago, we have not managed to solve its riddle.

And the riddle of the Sphinx is a fascinating one. One so fascinating that even the best of Egyptologists can only offer us theories about its origin and purpose. The truth is, some of them may be scared to say, ” I don’t know.”

Simply put, there are way too many mysteries surrounding it, and that is precisely what makes this monument such a unique and fascinating one.

In my personal opinion, Egyptologist Miroslav Verner gives us a fascinating description of the Sphinx:

And Verner’s quote is perhaps what best defines this ancient sculpture; the very embodiment of antiquity and mystery itself.

Therefore, here are my 5 reasons why Giza’s Great Sphinx is the most mysterious monument on Earth.

We really don’t. Ask any Egyptologist what the ancient name of the Sphinx was, and he’ll come up with an ‘old’ name of the statue, but not necessarily a really ancient one. That’s because we don’0t really know what the ancient Egyptians called the monument when it was completed.

According to mainstream Egyptologists, there are no written records that tell us what the name of the Sphinx was when it was completed, around 4,500 years ago.

The truth is, nobody knows the original name of the Spinx. The term “Sphinx” most likely originated around 2,000 after the statue was built.

That’s a huge mystery. The statue is obviously impressive today, and it was even more when it was just finished, thousands of years ago. We know it was an important one since it is the biggest Sphinx anywhere in Egypt, although it isn’t the only one.

So isn’t it strange that although there are hundreds of toms around Giza alone, and not one hieroglyphic inscription dating back to the Sphinx’s supposed age mentions it?

According to James Allen, an Egyptologist at Brown University, “The Egyptians didn’t write history, so we have no solid evidence for what its builders thought the Sphinx was. Certainly, something divine, presumably the image of a king, but beyond that is anyone’s guess.”

In my opinion, Allen is wrong. The Egyptians DID write history; they didn’t do so as we would today. In fact, if you look at ancient Egypt today, you’ll notices that everything they built is a piece of history written or carved in stone.

It is up to us to decipher and try and understand, just as we did with hieroglyphics and Coptic, what the ancients were telling us.

Medieval Arab writers, who would mention the Sphinx thousands of years after it was built, referred to it as balhib and bilhaw.

It is ancient, we don’t know how much

Some have referred to the Sphinx as the most ancient monument in Egypt. The truth is, we don’t know. It may very well be really ancient, or it may date back to the Fourth Dynasty and Pharaoh Khafre.

The question of who built the enigmatic Sphinx at Giza has baffled Egyptologists for a long time.

French archaeologist Auguste Mariette discovered a statue of Khafre hidden beneath the ruins of a monument he discovered adjacent to the Sphinx that would later be named the Valley Temple. This statue, from black volcanic rock, was one of the clearest pieces of evidence that connected Khafre with the Sphinx, according to Egyptologists.

But despite finding “telltale signs” that may or may not tell us who built the Sphinx, the truth is there isn’t a single valid explanation that can tell us just how old the statue is. The Sphinx is so old that even the ancient Egyptians found it buried beneath the sand.

Half-a-decade later, renowned Egyptologist Mark Lehner would conclude that it had to be Khafre who commissioned the Sphinx, based on eight points he presented in a paper in 2002 titled ” Giza As Is: Unfinished Business Reveals the Human Hand.”

Lehner explains, among other things, that the Sphinx Temple, the Sphinx, as well as the Valley temple, belong to one monumental construction phase attributed to Pharaoh Khafre:

Same style – Walls of Sphinx Temple and Khafre Valley Temple were built of the same large limestone core blocks with harder red granite as a finish. Khufu’s Pyramid Temple was not built with monolithic core blocks.