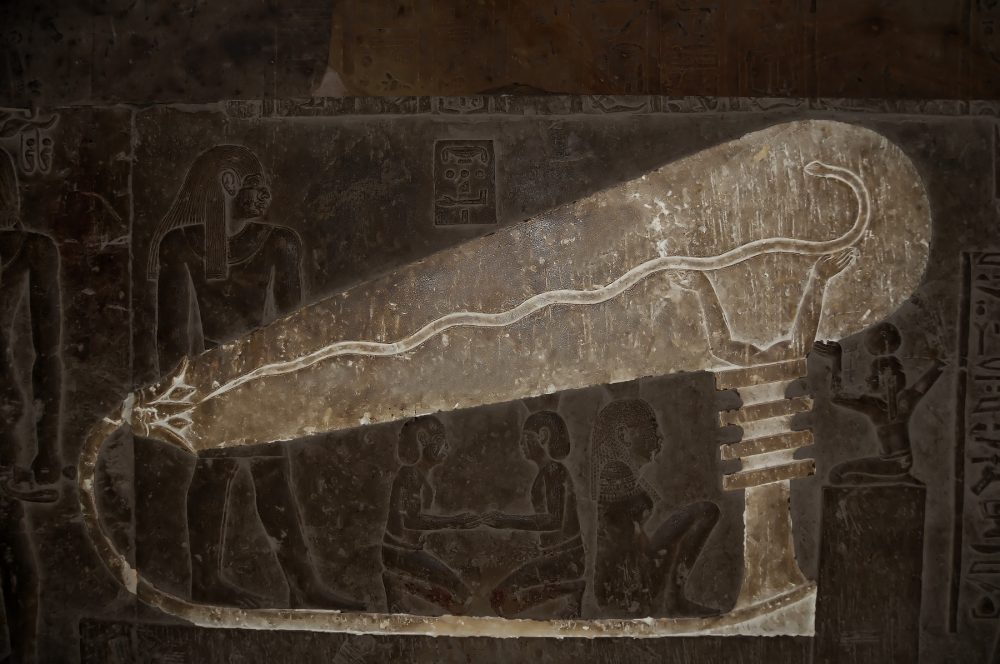 According to Egyptologists, the alleged Dendera Light is no more than a mythological ancient Egyptian illustration.

There is a curious illustration inside Hathor’s temple at Dendera, known as the “Dendera Light.”

In addition to Egypt’s mighty pyramids, some of which were built more than 4,700 years ago, the temples of ancient Egypt are, without a reason of a doubt, among the most impressive surviving monuments of the ancient world.

The ancient Egyptian temples were already ancient and a source of wonder in Greek and Roman times. Egypt’s temples continued to baffle explorers, conquerors, and travelers long after the ancient civilization that built them had vanished.

There are many temples in Egypt.

For centuries, ancient monuments such as the Great Temple of Amun at Karnak–considered the largest religious structure ever built on the surface of the planet–continued to astound those who gazed upon them.

People were left awestruck, not only by the richness of their architectural design but by their collective beauty, massive statues, and obelisks but also by their mindboggling size in general.

The fact is, no other ancient cultures constructed so many temples in ancient times. Although the remaining temples may represent not more than a fraction of the hundreds of temples constructed throughout ancient Egyptian history, the temples that remained offer unprecedented clues about the ancient civilization that erected them.

As explained by Richard Wilkinson in the book “The Complete Temples of Ancient Egypt,” temples in Egypt have been described as many things: as mansions of the gods, models of the universe and the land of the Pharaohs, portals to the divine, and islands of order in a cosmic ocean of Chaos. However, Egyptian temples were not one thing. They were a collective combination of all the latter.

Egyptian temples were glorious. From simple, ancient ritual structures erected even before the dawn of history to the massive mansions of the gods that towered above the golden sands of Egypt, Egypt’s temples result from the architectural development of more than one thousand years.

Eventually, the majestic temples developed far larger and glorious than the people had ever imagined, to the point that they even threatened to eclipse the wealth and power of the very kings who commissioned their construction.

“He made it as a monument for his father Amun … making for him a splendid temple — a monument of eternity and everlastingness.” –Stela of Amenophis III.

The temple of Hathor, which stands at the site today, is one of the best-reserved temples of this particular time of Egypt.

Located not far from the city of Dendera, the temple complex is located south of Abydos.

The Dendera Temple Complex is also one of the largest in existence, covering more than 40,000 square meters. The entire complex is enclosed by a large wall made of mudbrick.

Located in the vicinity of the temple complexes is the Dendera Necropolis, which features various ancient mastaba tombs, some of which are believed to date back as far as the Early Dynasty Period of the Old Kingdom to the First Intermediate Period of Egypt.

Of all the structures that are located nearby, the most dominant structure is the Temple of Hathor.

Like many other ancient Egyptian temples, the Dendera complex is oriented in relation to the Nile River. However, since the Nile bends there, the structure faces north instead of the East-West directions it would normally face.

The temple was greatly influenced after its construction, evidence of the Roman era kiosks and the propylon gateway, which were constructed during the reign of Domitian and Trajan.

The ceiling of the ancient temples is one of its best features. It retains much of its original color and is decorated as a complex and carefully aligned symbolic chart of the heavens. It also features the zodiac elements –introduced during Roman periods–and images of the sky goddess Nut.

Many Ptolemaic rulers constructed the inner core of the Temple of Hathor.

Archaeologists excavating the temple have discovered traditional crypts where temple treasures were stored hidden inside the walls and beneath the floors of the chambers, in the rear part of the temple.

Inside these “secret” compartments, the ancient priests held the statue of the ba of Hathor, which was only taken from the crypts and transported to the temple’s roof in the important New Year’s festival, which was celebrated at the site.

However, in addition to its numerous archeological treasures, some of the depictions on the temple walls of Hathor are peculiar for several reasons.

One particular depiction is referred to in modern times as the Dendera light or the Dendera Bulb. It references a strange illustration that appears to be showing how the ancients manipulate a kind of apparatus.

Definition: The so-called Dendera light is, in fact, an ancient engraving that shows two oval “cartridges” with what seems to be a snake inside each one. The entire illustration is supposedly reminiscent of the inside of present-day incandescent lightbulbs, which has led many people to believe that instead of being a typical set of symbolic images from Egyptian mythology, the odd representation on the temple’s wall could be evidence of advanced ancient technology in ancient Egypt.

Mainstream scholars explain that the so-called Dendera light is no more than a djed pillar and a lotus flower spanning a snake inside it. This is a typical representation in Egypt, symbolizing stability and fertility, respectively.

In ancient Egypt, the djed is a symbol of stability and the interpretation of the backbone of the god Osiris.

The snake, which seems to be emerging from the lotus, is believed to be a symbol of fertility, directly linked to the Nile river’s annual flooding.

However, instead of this interpretation of the illustration inside the temple, some people have argued that the Temple of Hathor offers conclusive evidence of advanced technology present in ancient Egypt.

Some authors have argued that the Dendera Light is not a mythological illustration but evidence of electricity and light in ancient Egypt.

They argue that the alleged depictions of a lotus flower and a snake are much more similar to devices known today as arc lamps.

Despite the curious illustration at the temple, archeologists have failed to find evidence of anything used to manipulate electricity in Egypt and therefore suggest that this illustration is no more than one of the many mythological depictions of ancient Egypt.

Furthermore, there are no ancient texts in Egypt associated with the use of electricity in ancient Egypt.