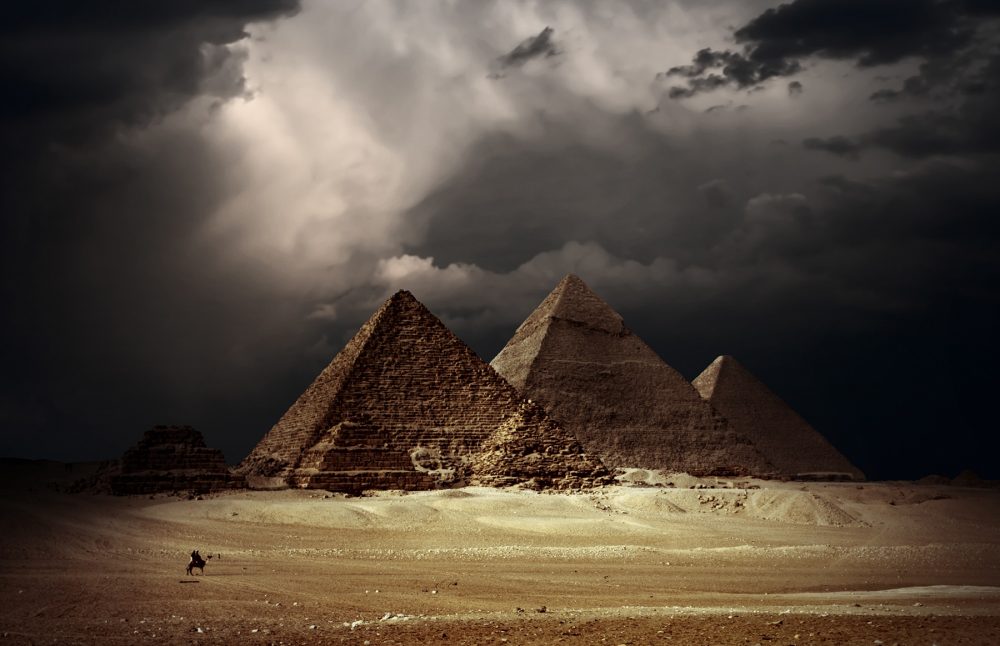 The truly massive ancient Egyptian pyramids built over the course of only three generations.

Whenever the word Pyramid is mentioned, that of Khufu–the Great Pyramid of Giza–springs immediately to mind. It is because the Great Pyramid is the most popular of them all, and has received much more attention than any other pyramid throughout countless decades of study.

Tourism sees it as the most impressive structure on the planet, and its two accompanying pyramids–that of Khafre and Menkaure–make the Giza Pyramid complex the center of the ancient world for many people.

Millions of people travel to Egypt to see the majestic structures that were erected, thousands of years ago with nothing more than simple and ordinary tools, by one of the most advanced and sophisticated civilizations to ever exist on Earth.

ut Egypt has much more to offer than the Great Pyramid of Giza. Many other ancient pyramids exist at the edge of the plateau, just west of present-day Cairo, and there are many pyramids, hundreds of them, as far south as Sudan.

Altogether, experts believe there are around 120 pyramids in Egypt, but scholars estimate that many more may remain hidden beneath Egypt’s golden sands.

To modern Egyptologists, the pyramids were nothing more than the tombs created for the Pharaohs of Egypt. In later times, not only the Pharaohs had pyramids, but the Queens of Egypt as well.

As noted by highly-respected Egyptologist Ahmed Fakhry, the earliest attempt to built a tomb in the pyramidal shape is represented by the Step Pyramid at the Saqqara necropolis. This ancient structure, the first of its kind is thought to have been erected around 2,870 BC, while the first “true pyramid” dates from the reign of King Sneferu, at the beginning of the Fourth Dynasty of ancient Egypt, around 100 years later.

Therefore, we see that the Great Pyramid of Giza is not the oldest pyramid. When the Great Pyramid was planned and designed, around 4,600 years ago, Egypt was a land that already had several pyramids decorating its landscape.

After the Step Pyramid, several generations of Pharaohs attempted in building a Step Pyramid but failed until Sneferu, ancient Egypt’s greatest pyramid builder.

The concept of a pyramidal tomb, according to Egyptologists, can be traced back to centuries of development and experiment. The earliest royal toms are of great interest since according to experts, they show the development of ancient Egyptian funerary architecture during a time that predates the pyramids. These tombs were referred to as mastabas, and are thought to have been built until the start of the Third Dynasty, around 2,780 BC when Djoser revolutionized ancient Egyptian architecture.

Although the King had followed tradition in building a mud-brick mastaba not far from Abydos, for reasons not entirely clear, Djoser turned to Saqqara and ordered his young royal architect, a man called Imhotep, to built a structure that redefined the word possible in ancient times.

Imhotep, therefore, built a structure that started off as a square mastaba but underwent various changes during construction, when its builders enlarged the structure turning it essentially into several superimposed mastabas, one stacked on the other, giving the structure the final shape of a stepped pyramid.

Although impressive, the Step Pyramid would soon be forgotten. King Sneferu made sure of that. The founding Pharaohs of the Fourth Dynasty began building what experts believe is the first attempt at a true pyramid. Sneferu chose Dahshur, and it is there where he erected the famous Bent Pyramid, so called due to the two clearly visible different angles.

It is one of the most unique pyramids in Egypt, but it was not intended to have this form.

Sneferu also built a pyramid at Meidum, but this structure is believed to have collapsed in antiquity, even possibly during construction.

However, Sneferu’s greatest and most impressive pyramids, dwarfing all other pyramids of the time, was built not far from the Bent Pyramid.

The Red Pyramid also called the North Pyramid would become the largest of the three major pyramids at Dahshur.  This structure is acknowledged as ancient Egypt’s first successful attempt at building a true smooth-sided pyramid.

Sneferu revolutionized the ancient Egyptian pyramid building techniques with his three pyramids, laying down the foundations for the construction of the pyramids at Giza.

After Sneferu, his son Khufu became the Pharaoh of Egypt. Early in his reign, Khufu is thought to have commissioned the Great Pyramid of Giza, a structure that would become the most impressive and sophisticated pyramid ever constructed in ancient Egypt.

It is the only known eight-sided pyramid in Egypt and the only one that has both inner ascending and descending passageways.

Khufu was succeeded by Khafre, who just as his predecessor built a staggering pyramid at Giza.

Although not as massive as the Great Pyramid, Khafre’s monument was another massive pyramid soaring towards the sky. With an estimated original height of 143.5 m, the pyramid stands at 136.4 meters today. Built with a total volume of 2,211,096 cubic meters (78,084,118 cu ft), the Pyramid of Khafre is ancient Egypt’s second-largest pyramid. This pyramid is peculiar because it appears to be larger than that of Khufu, but that’s only because it sits on bedrock with an elevation of 10 m (33 ft).

Pyramids that followed after Khafre were lesser in every way.

The Pyramid of Menkaure is a testimony that after the construction of the second-largest ancient Egyptian pyramid, the structures that would be built were ar lesser in terms of size, complexity, and materials.

Therefore, we can conclude that the truly gigantic pyramids of ancient Egypt were built over the course of only three ancient Egyptian generations, starting with Sneferu, Khufu, and Khafre. Sneferu’s three pyramids alone contain more than 3.5 million cu. meters (124 million cu. ft) of stone.

Although Menkaure used multi-ton blocks of stone when he built the third-largest pyramid at the Giza plateau, the structure’s total mass is less than that of Djoser. It is rather surprising to see that although Pharaohs would still build pyramids in the 5th and 6th dynasties, these structures were constructed on a much smaller scale, with smaller stones and a core of stone rubble fill, which in one sense reveals the structures as being inferior and lesser monuments.

Therefore, the generation that built the truly massive pyramids of Egypt is that of Sneferu, Khufu, and Khafre during ancient Egypt’s Fourth Dynasty.