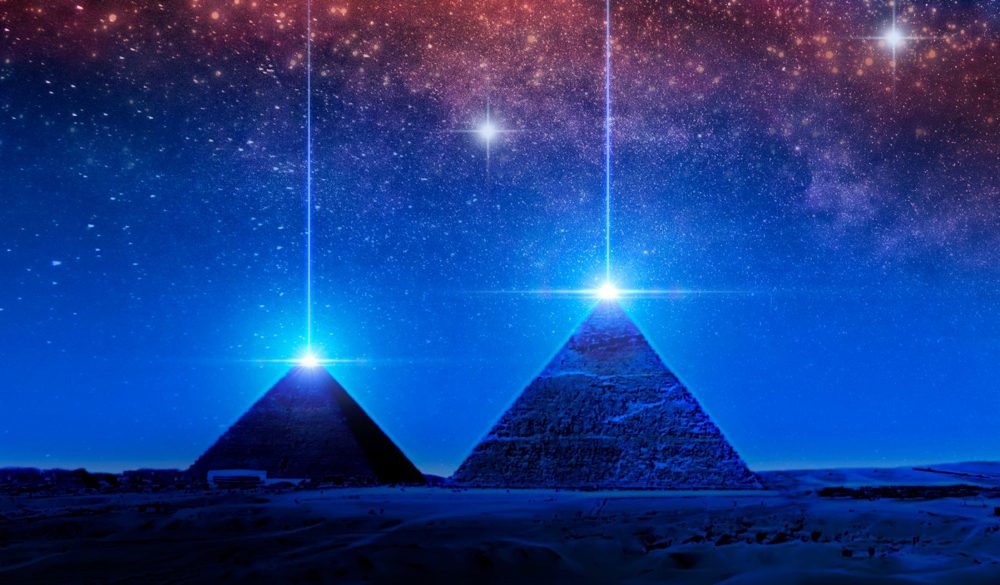 "Enclosing the dangerous interface between cosmic order and the terrible formlessness of time before the beginning, the Pyramid was better understood as the very meeting point of life and light with death and darkness..."

Egypt was a cradle of civilization, allowing the same basic culture and language to prosper for nearly 3,000 years. Even before the rise of the first Pharaoh that united the country, Narmer (also called Menes), an organized culture existed in the region, flourishing along the Nile. It may not have been a complex pyramid building cultures like ancient Egypt around 2,600 BC, but nonetheless, it was an advanced one.

The ancient Egyptian Dynastic period is usually acknowledged to have begun around 3100 B.C. But even before that, between 9300 and 4000 B.C., the Nile plain was inhabited by Neolithic peoples, about which we knew very little.

What we do know is that this ancient culture, a civilization that would later give rise to the Ancient Egyptians, was a pre pharaonic people who built megaliths, intricate shires as well as calendar circles that resemble mini-Stonehenges. “…several behavioral indicators, combined with the technological and ceremonial architecture, such as calendar circles and sanctuaries, imply a level of sophistication that goes well beyond that shown by groups of herders…”

In the years after Narmer, Upper and Lower Egypt grew together, and slowly, step by step and piece by piece, ancient Egypt became a mastermind of civilization as different rulers came to the throne.

But a real revolution took place around 2,700 BC. Pharaoh Djoser ruled over ancient Egypt, and with his reign, the giant pyramid of stone appeared in the 3rd dynasty. Djoser erected the first pyramid and mortuary complex made from stone, surrounded by a massive enclosure wall more than 1,600 meters long.

But pyramid building and the origins of the most impressive pyramids in Egypt can be traced back to the predynastic period’s modest pit graves, covered by simple mounds of sand and gravel. Not long after, at the very start of the 1st Dynasty, around 2,900 BC, royal tombs were built as intricate mudbrick boxes installed into Egypt’s desert and divided into several rooms, just like houses. Tombs would become more complex, and while most of them were monumental in terms of size, none of them could match the scale that emerged suddenly in the 3rd-Dynasty reign of Djoser, circa 2630–2611BC.

During the Old Kingdom, right until the first intermediate period around 2,100BC, the ancient Egyptians built incredible structures called pyramids for their God-Kings in a 72-kilometer span of the desert, extending from Abu Rawash just northwest of Giza to Meidum in the South, at the footsteps of Fayum.

The pyramids of Djedefre and Sneferu are exceptions.

The most massive of Egypt’s pyramids would eventually be erected over the course of only three generations; Pharaoh Sneferu, his son Khufu and grandson Khafre.

If Sneferu built the Pyramid at Meiudm, which eventually collapsed, and the two stone pyramids located at Dashur, then his pyramids contain more than 3.4 million cu. meters (124 million cu. ft) of stone. Interestingly, all other pyramids built by Egyptian Pharaohs combined contain only 41 percent of the total mass of the pyramids erected by Sneferu, Khufu, and Khafre. Although Menkaure, who built the third-largest pyramid at the Giza plateau, still used massive blocks of stone weighing several tons, his pyramid’s total mass was less than that of Djoser.

The Great Pyramid of Giza, believed to have been commissioned by Khufu, saw builders use more than 2.3 million stone blocks to build it. This resulted in a pyramid that would remain the tallest structures built on Earth for the next 3,800 years. The overall weight of the Great Pyramid of Giza is estimated at around 6 million tons. Researchers have calculated that 5.5 million tons of limestone, 8,000 tons of granite (imported from Aswan), and 500,000 tons of mortar were used to construct the Great Pyramid.

According to one chronology, no more than 60 years passed between the completion of Djoser’s Pyramid and the start of constructing the Great Pyramid of Khufu.

This means that someone may have been a small child when Djoser’s Step pyramid was finished and lived to see the building of the Great Pyramid when the ancient Egyptian pyramid building was at its peak.

The rule of Sneferu, Khufu, and Khafre saw the building of the most massive pyramids the country would ever witness. Rulers of ancient Egypt’s 5th and 6th dynasty would still continue building pyramids, but incomparable in size and complexity with the structures built during the fifth dynasty.

During the first intermediate period, Egypt nearly forgot about Pyramid building. But the phenomenon did not stop, although pyramids would be of lesser materials and quality.

But Egyptologists argue that pyramids were tombs. Pyramid Complexes acted as divine superstructures. This means that each major tomb in ancient Egypt was actually a tomb for the Pharaoh.

Since, in ancient Egypt, Pharaohs were deified as gods, each pyramid was part of a temple complex that was managed and maintained by the priesthood long after the Pharaoh left the Earthly realm.

But as revealed by Lehner, the pyramid was also an economic engine, deploying people and redistributing food through the temple complex. But this was only possible because the pyramid was also a cosmic engine, one that would serve not only as a tomb but also as a structure that ensured the rule of universal order; the turning of the days and seasons and the Nile’s flooding.

But Lehner doesn’t mean that the structure itself was an engine like many alternative theories suggests, although there is compelling evidence it may have been more than just a tomb.

Lehner explains that the pyramid’s mechanics as a cosmic engine were tied to the ancient Egyptian concept of a person and the distinct phases of life and death, referred to in ancient Egypt as kheperu. The pyramid, in a sense, was an instrument that enabled an ancient type of Egyptian alchemy to take place; in the distinct phases of life and death, the kheperu, the transformation would continue when the ka, the ba, and the body interacted in the final transformation, turning into the akh; a glorified being of light, existent in the afterlife.

The pyramid–the pyramid complex– was precisely the cosmic machine that allowed this magical transformation to occur, meaning that even for the ancient Egyptians, the pyramid was not only a tomb that would house the pharaohs remains. The Pyramid was the instrument that allowed the process to take place for the pharaoh, who ruled over the land as the god incarnate and allowed the incarnation to pass from father to son, from Osiris to Horus.

Enclosing the dangerous interface between cosmic order and the terrible formlessness of time before the beginning, the Pyramid was better understood as the very meeting point of life and light with death and darkness. Our earliest insights into such ideas originate from the Pyramid Texts, sacred glyphs written on the walls of the pyramid chambers of Pharaoh Unas from the 5th dynasty. The Pyramid Texts explain the meaning of the pyramid as an icon and offer clues into the burial ceremonies that took place for the god-king and the rituals that royal priests performed once the Pharaoh’s mummification process had taken place. He was entombed, setting off the cosmic engine in motion.

Written in Old Egyptian, the pyramid texts were carved onto the subterranean walls and sarcophagi of pyramids at Saqqara from the end of the Fifth Dynasty. Throughout the Sixth Dynasty of the Old Kingdom and into the Eighth Dynasty of the First Intermediate Period.

Essentially, for the Pharaoh, the pyramid became the place of ascension and transformation. And it is the names of the pyramids that are a tell-tale sign that pyramids were seen as places of ascension and transformation; Khufu’s pyramid was akhet, the Horizon of Khufu. Archaeologists have discovered a series of 5th dynasty pyramid names that reference the king’s rising, while five refer to his perfection.

In that sense, the Pyramid was a machine, a device, a sort of channel used not as much as a tomb perhaps, but as a higher, cosmic engine thousands of years ago.