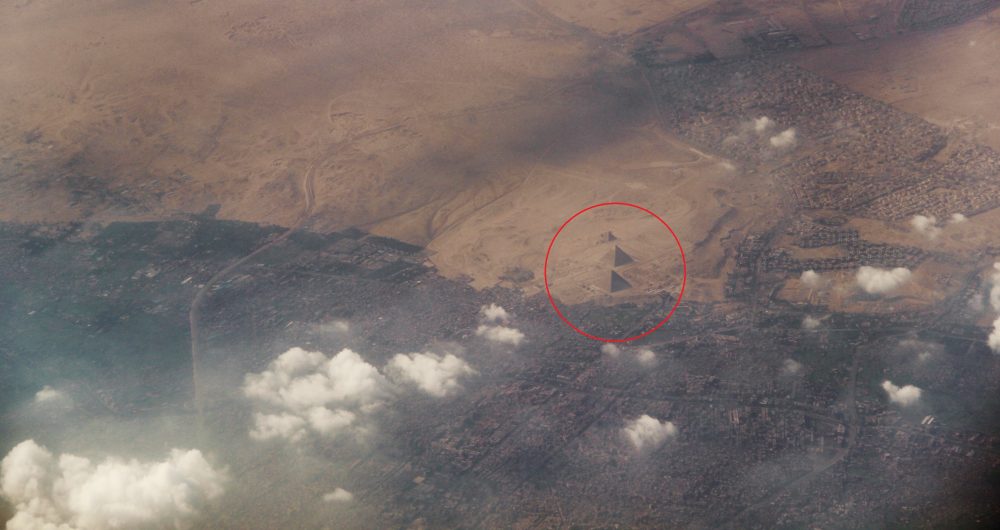 Here's a stumping collection of aerial images of the ancient Egyptian pyramids you have to see.

The truly gigantic size of the pyramids of Giza is hard to describe. The three main pyramids—perhaps the most famous in the world—are located at the edge of the Western Desert, some 9 km (5 mi) west of the Nile River in the city of Giza, and approximately 13 km (8 mi) southwest of the city center of present-day Cairo. There, gigantic monuments, considered by some to have been ancient tombs built for the Kings of Egypt, were built thousands of years ago in the middle of the desert.

The area where the pyramids, the Sphinx and remnants of ancient temples stand is also known as the Giza Necropolis.

The most prominent pyramids at the plateau are its three main attractions. According to mainstream Egyptologists, the three pyramids of Giza, also known by many as the “Great Pyramids” (Although three is only one Great pyramid in Egypt), are thought to have been built in three generations; Khufu, Khafre and Menkaure.

Although the three pyramids are a great tourist attraction, a massive statue which has stood guard at the footstep of Khafre’s pyramid for thousands of years is another jewel at the Giza plateau. Considered the largest monolithic statue on Earth, the Great Sphinx of Giza is shrouded in mystery, perhaps just as much as the massive pyramids behind it.

Cut from the very bedrock upon which the pyramids stand, the original shape of the Sphinx has been restored with layers of blocks throughout time. It is so old that experts argue it is the oldest known monumental sculpture in Egypt, although mainstream experts refuse to acknowledge the possibility it dates further back than Khafre. Gaston Maspero, the French Egyptologist and second director of the Egyptian Museum in Cairo was convinced of precisely that which mainstream scholars refuse to admit.

Gaspero believed the Sphinx to be “the most ancient monument in Egypt,” dating to a time predating the reign of Khafre or his direct ancestors.

Just as there are no written accounts of how the pyramids were built, how the stones used in their construction were quarried and transported from far-away quarries, and how the massive stones were put into position, there are absolutely no records that mention the Sphinx or its purpose.

Never have experts found anything that would shed light on when the Sphinx was carved, and what it meant in ancient times for the people that worshiped it.

The Giza plateau and its stumping monuments are therefore as mysterious as they are beautiful. It is perhaps that very same mystery that gives the ancient monuments of Egypt a special charm.

Despite a lack in records from the (supposed) time the pyramids and Sphinx were built, Egyptologists maintain that they know exactly the purpose of the pyramids and the Sphinx. The pyramids, they say, were no more than tombs for the great Pharaohs Khufu, Khafre and Menkaure.

The Sphinx served as a monument irradiating the power of the king. They say that when it was completed, during the reign of Khafre, the Sphinx bore the head of the Pharaoh, fused with the body of a lion.

Egyptologists argue that the pyramids are therefore just massive piles of stone, that were constructed to protect the mummified remains of the pharaohs in the afterlife. If the pyramids really were the tombs of Egypt’s Kings, then why is their interior so cold, and undecorated?

Usually, ancient Egyptian tombs are highly decorated with murals illustrating the might of the King and his journey in the afterlife.

The pyramid of Giza, and all other pyramids in Egypt for that matter, have a complete lack of decorations in their interior. The alleged burial chambers within the pyramids are left completely undecorated, with no symbols, marks or illustrations, other than those left behind by tourists in ancient times.

This is one of the greatest mysteries of the pyramids. The only mark that was allegedly left behind by the “builders” of the pyramid and one of the crucial pieces of evidence that places the Great Pyramid of Giza at the time of Khufu is a poorly scribbled mark inside the pyramid, naming the work gang.

This alleged mark supposedly names the gang that helped build the pyramid and makes reference to the Fourth Dynasty rule of Khufu. However, for all we know, this could have been added to the pyramid in any part of history.

There are many mysteries surrounding the great pyramid of Giza. Why does it have three (known) chambers? What was their purpose of the pyramid served as the tomb for one Pharaoh?

Furthermore, why is the Great Pyramid of Giza the only one in Egypt with both ascending and descending passages? No other pyramid has been built like that. All pyramids that predate it are dissimilar.

Spotted for the first time in 1940 by British Air Force pilot, P. Groves as he was flying above the massive monuments, the eight sides of the pyramid were detailed in The Pyramids of Egypt, 1975, p. 207 by I.E.S. Edwards:

“In the Great Pyramid the packing-blocks were laid in such a way that they sloped slightly inwards towards the center of each course, with a result that a noticeable depression runs down the middle of each face — a peculiarity shared, as far as is known, by no other pyramid,” Edwards wrote.

But many other striking facts are embedded within this ancient pyramid.

The Great Pyramid of Giza, which remained the tallest building on the surface of the planet for 3,800 years after it was completed, was built with unprecedented precision and alignment.

According to the survey of J.H. Cole of the monument in 1925, the accuracy of the pyramid’s workmanship is such that the four sides of the base have an average error of only 58 millimeters in length. (Survey of Egypt, Paper No. 39; Government press, Cairo.)

Furthermore, as revealed by Flinders Petrie, the sides of the square base of the Great Pyramid are closely aligned to the four cardinal compass points (within four minutes of arc) based on true north, not magnetic north, and the finished base was squared to a mean corner error of only 12 seconds of arc.

It seems that whoever designed the pyramid—according to mainstream scholars the builder of the Great Pyramid was Hemiunu—was a great scientist and mathematician. Measurements of the pyramid have further revealed that the ratio of the perimeter to height of 1760/280 Egyptian Royal cubits equates to 2π to an accuracy of better than 0.05 percent.

True wonders of ancient engineering, it is believed that the pyramids at Giza were built by the ancient Egyptians in a span of 85 years between 2589 and 2504 BC.

However, Egypt has more than just the pyramids at Giza.

Not far from the Giza plateau, to the south of the “Great Pyramids” stands the oldest pyramid of Egypt. This is believed to be the Third-Dynasty pyramid of King Djoser, the so-called Step Pyramid of Saqqara.

Eventually, future generations of rulers worked and developed the design of the pyramid until the “perfect” pyramid was created.

This is the Red Pyramid of Fourth Dynasty king Sneferu, Khufu’s father.

Sneferu is ancient Egypt’s greatest pyramid builder. He erected three pyramids; one at Meidum and two at Dahshur. His pyramids at Dahshur were revolutionary in many ways. The Red Pyramid is believed to have laid down the foundations for the construction of the Great Pyramid.

Sneferu’s Red Pyramid is regarded as the first successful smooth-sided pyramid in Egypt.

As explained by Egyptologist Mark Lehner, the truly gigantic pyramids of Egypt were built over the course of three ancient Egyptian generations starting with King Sneferu, his son Khufu and grandson Khafre.

Although Menkaure who built the third-largest pyramid at Giza used multi-ton blocks, his pyramid was smaller in total mass even compared to Egypt’s first pyramid. 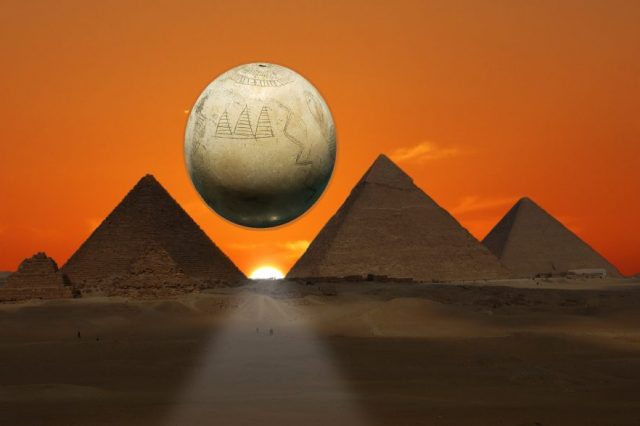 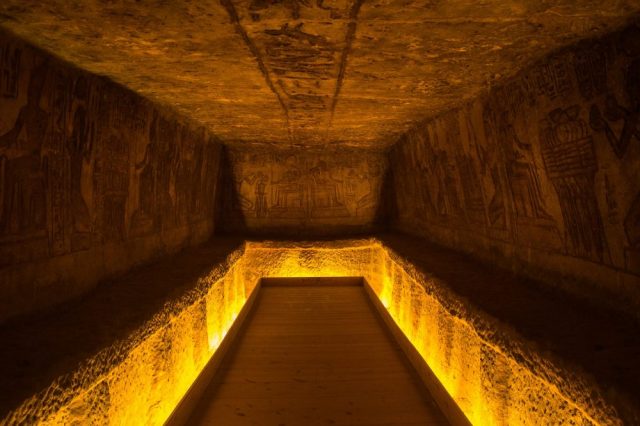