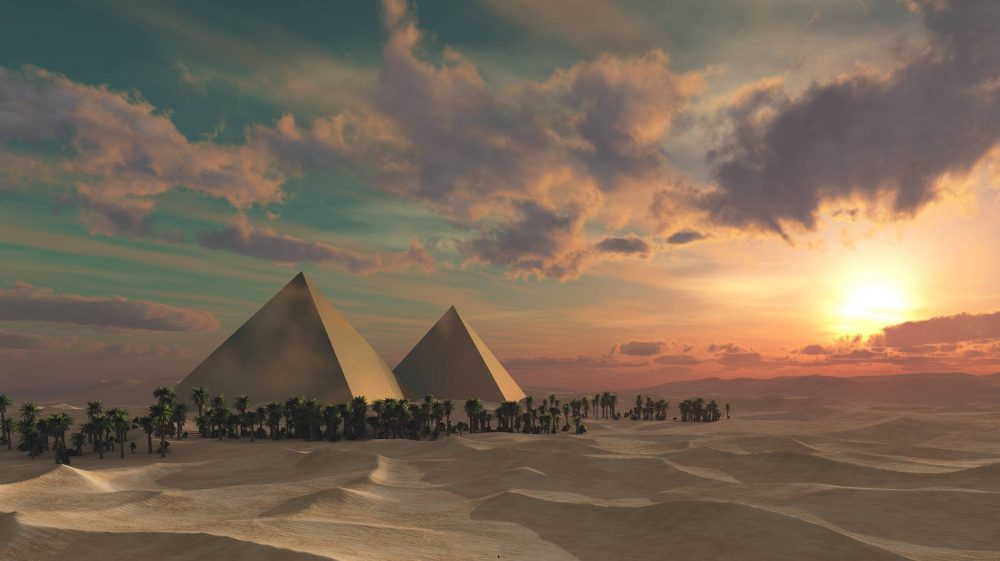 Although the ancient Egyptian civilization was not the first ancient culture to build pyramids, the pyramids of Egypt are certainly the most famous of all.

The earliest pyramidal structures—not pyramids—called Ziggurats were built in ancient Mesopotamia much sooner than the Pyramids of Egypt. It has been argued by scholars that it where Ziggurats which influenced later civilizations like Egypt to build pyramids.

The Ziggurats were of great importance and would be painted brightly in gold and bronze.

Although equally imposing, ziggurats were different from Pyramids mostly because they were built of sun-dried mud-brick, unlike the Egyptian monuments which were built of stone.

And that precisely why only a few ziggurats remain standing today, while stone-built pyramids are found all across the world, still standing after thousands of years.

The earliest ziggurats began near the end of the Early Dynastic Period, and the latest Mesopotamian ziggurats date from the 6th century BC. The Ziggurats were created in receding tiers upon a rectangular or square platform. Their top was flat.

Egyptian pyramids were different. Built out of rock, the ancient Egyptian civilization would eventually erect monuments that became the world’s largest constructions. The Egyptian pyramids would reach for the sky. They were covered in highly polished, reflective limestone, which made the pyramids reflect the rays of the sun, almost like a mirror. Their capstone was usually made of granite or basalt and was most likely plated with gold or silver, making the entire monument shine like a star in the night.

Starting around 2,700 BC, the ancient Egyptians would continue building pyramids for a thousand years until 1,700 BC. The Egyptian sun god Ra acknowledged as the father of all pharaohs was said to have created himself from a pyramid-shaped mound of earth before creating all other gods.

The first pyramid built by the ancient Egyptians was the pyramid of Djoser, also known as the Step Pyramid. Located in the Saqqara necropolis in Egypt, the Step Pyramid is widely recognized as the earliest monumental stone building in Egypt.

Commissioned in the 27th century BC, the pyramid was envisioned as the eternal burial place of Pharaoh Djoser. The pyramid was built by Djoser’s royal vizier Imhotep; the first pyramid builder.

Imhotep made sure to create a unique tomb for the Pharaoh, which is perhaps why the pyramid went through several revisions and redesigns that steered away from the original plan. The Step pyramid once stood 62.5 meters (205 ft) tall, with a base of 109 m × 121 m (358 ft × 397 ft) and was clad in polished white limestone.

The original idea of a step pyramid was drawn from several precedented; the most relevant of which was the Saqqara mastaba 3038 built circa, 2700 BC. This structure was almost a pyramid by accident. It was built in a deep rectangular pit with mudbricks walls six meters in height. The three sides of the mastabas were extended and built out creating eight steps that rise into the air at an angle of 49 degrees. Had the remaining side not been left uncovered, this structure may have become the first elongated step pyramid.

Imhotep would eventually create six mastaba-like structures and combined them into one, resulting in the steps we see today in Djoser’s pyramid.

What started off as a complex mastaba, featuring some of the most amazing stones ever quarried to date, was remodified and expanded until it was turned into a staircase to the heavens, one that Pharaoh Djoser would walk in his afterlife, in order to meet Ra. —Pyramidomania; a World of Pyramids, Ivan Petricevic.

Djoser’s Step Pyramid was built with a total volume of 330,400 cubic meters. It was constructed between 2667–2648 BC and is the first Pyramid built in ancient Egypt.

Although not famous, the Pyramid of Meidum is ancient Egypt’s second attempt at building a pyramid, and the first attempt in building a straight-sided pyramid. The pyramid was probably “built” between 2600 and 2589 BC.

Located around 100 kilometers from Giza, the Pyramid of Meidum was probably intended for Pharaoh Huni, although it was finished by Sneferu. But the Pyramid at Meidum was not successful, and Egyptologists argue that it already collapsed in ancient times. The man who was in charge of the construction process was Imhotep’s successor. Obviously, he wasn’t as triumphant as the original pyramid architect.

The structure most likely collapsed due to cardinal construction mistakes, and the fact that the architect in charge made various modifications to Imhotep’s original design.

There is also conclusive evidence that the Pyramid at Meidum was extended at least two times during construction. The second extension is that which may have turned the pyramid from a step pyramid into a true pyramid. The builders were told to fill the steps of the pyramid using limestone encasing. Their plan failed and proved catastrophic.

The pyramid eventually collapsed mostly because the inner step pyramid was designed and envisioned as the final stage of the structure. Additional material only compromised the stability of the structure.

It has been argued that the collapse of this pyramid is one of the main reasons why Sneferu’s second pyramid, the Bent Pyramid, was built with an angle of 43 degrees, instead of 54 degrees.

The Bent Pyramid of Sneferu, located in the necropolis od Dashur, is a unique example of early pyramid development in Egypt. The pyramid is usually believed to have been completed around 2,600 BC. It is the third pyramid built in ancient Egypt.

The pyramid is characterized by the fact that it rises from the ground at a 54-degree angle, but its upper section, above 43 meters, was changed and built at a much shallower angle of 43 degrees, precisely what gives the pyramid its notorious bent shape.

The reason why the Pyramid was bent may have something to do with the stability of the structure. It has been suggested that although the pyramid builders started off the structure at a 54-degree angle, they were forced to reduce the angle because the pyramid developed instability signs. Therefore, in order to not repeat the mistakes, the builders at Meidum made, the constructers of the Bent Pyramid were forced to adopt a much shallower angle.

Evidence of that can be found not far away at the Red Pyramid which was built immediately after the Bent Pyramid. The Red Pyramid was initially built having an angle of 43 degrees.

The Bent Pyramid is also unique because of all pyramids in Egypt, the Bent Pyramid’s outer limestone casing remains largely intact.